Love comics books? Join as we unveil the fourth installment (and four more comics) walking you through the best and most influential issues of all time. Should you need it, we have an introductory article to let you know more about the plan here and you can still check out the comics previously discussed in Round 1, Round 2, and Round 3. With that out of the way, let's return to Tony Isabella's 1,000 Comic Books You Must Read for four more issues!

I've been a John Byrne fan for a very long time. I met him at an early Mid-Ohio-Con just as he was busy altering what it meant to be Superman and crafting a new narrative for the Fantastic Four (mid-80s just a few years before this issue). John can have a humor to his writing and a visual style that is masterful. The individual himself has been described as "very opinionated" and he himself has said, "I just don't suffer fools gladly". For me, he was one of those creators whose work I sought out then and still do today. He's brilliant.

Here, with She-Hulk, he writes and draws the series bringing something very fresh to the character. He made the decision to approach the title with humor and allow the main character to break the fourth wall often, talking with the reader. At first it’s surprising, but you quickly realize this is a solid aspect of the narrative. Byrne would only remain with the title for eight issues, but the love-hate relationship She-Hulk quickly builds with him as the series writer (plus her awareness that she is in a comic book) just work. We see it in titles like Deadpool today but this was very original back in 1989 and, as Tony points out, probably not done quite as well since these issues.

This is not a topic I seem to find myself discussing a lot in comic circles these days, but when I was younger I was a HUGE Sgt. Rock reader. I devoured these stories and loved playing army men leading Easy Company on adventures deep into enemy territory. This read was like visiting and old friend I haven't seen in years and somehow, this was an issue I'd never read so thank you Tony for the pointer. It was validly deserving of the 1000 inclusion.

Rock's stories are always grim and usually have a dark twist or two along the way. This time we see a gifted artist come to terms with the war and this changing sentiment is reflected through the art he draws. It's a wonderfully introspective and visceral story, but by no means an easy read. There were other stories within the issue, but none were as strong or interesting as the primary tale, which just dazzled.

As an interesting aside, the fact that the issue was dedicated to Shelly Mayer sent me off learning more about the man and his career. I'm glad I did as I learned that he was among those credited with rescuing the unsold Superman comic strip from the rejection pile and Scribbly, the artist being introduced to the war in this story, is a homage to the semi-autobiographical strip Mayer did chronicling his trials as a novice cartoonist. Much loved and respected, Mayer was inducted into the comic book industry's Jack Kirby Hall of Fame in 1992 and the Will Eisner Comic Book Hall of Fame in 2000. Mayer edited and participated in the creation of the Flash, Green Lantern, Hawkman, Wonder Woman, and All-Star Comics, home to the Justice Society of America, to name just a few characters.

I'm always surprised just how much of a thick read these Golden Age comics tend to be. Clocking in at well past 65 pages this 1939 gem features stories of Superman, Scoop Scanlon, Pep Morgan, Marco Polo, Tex Thomas, Chuck Dawson, Zahara the Master Magician, and a narrative piece by Lieutenant Cummings. To say this one was jam packed would be an understatement. Between the issue's covers we see Superman's first super-villain, reporters solving mysteries, cargo ships hijacked, planes tested, slavers thwarted, dark societies, cowboy stories, and a magic trick or two. This is pulp storytelling that's full of action and adventure.

For me, the Superman story wasn't the most interesting part of the issue. That honor goes to the Zatara story, "Swamp Of Satan" which felt ahead of its time and downright creepy. That said, it's Supermen that puts this issue in the 1,000 and earns the Ultra-Humanite the honor of being his first powered foe. At its heart the story is a protection racket tale with Superman breaking up a criminal operation headed by his new foe. They meet for the first time and things get rough and tumble pretty quickly. At one point an unconscious Superman is actually strapped to a table, slowly moving toward a running saw blade. How more iconic does it get?

What honestly surprised me was how missing the "boy scout" nature of the Man of Steel was here. He throws himself into planes to watch them crash, saves himself while a foe topples to his death, and life as a hero just feels at lot more cut and dry than I would have expected. Tony explains, "This was my father's Superman and you didn’t mess with him." I most certainly agree. Those who do clearly tend to die within these pages.

This issue tells the story of "The Tower of the Elephant!" and it is simply nothing short of magnificent.

Taking to comic form one of the original short stories by Robert E. Howard, the Hyborian Age of Conan bends toward the psychedelic and the science fiction in this installment. Here, we begin with a very barbarian driven story set in a tavern. Basic sword and sorcery stuff, right? Conan quickly overhears a conversation and is tempted by a treasure that is rumored to be theft proof. He meets a fellow thief along the way, scales a tower of glass, and encounters the unexpected along the way. Following this next series of panel, the entire issue shifts direction and things get very interesting, somewhat touching, and quite engaging.

I don't care what series I'm reading, the art of Barry Windsor-Smith is like a visual treasure to me. Here, we see that art and the artist behind it still very early in his career and evolution. It's magnificent, yet knowing that it only gets better over the years makes me appreciate it all the more in this issue. Also, it's clear to me that writer Roy Thomas had a chore facing him when he sat down to pack this much story into a single issue. A lot happens in these pages, yet the pace and flow do not feel forced for a moment. This is classic Conan at it's best and, quite sincerely, classic Marvel really shining through in a done-in-one story.

I'm not alone in my appreciation of this issue. "The Tower of the Elephant" and its tale of Conan and his world breaks down expectations as it moves into science fiction and beyond before it's done. Instantly revealing in terms of the world in which Conan lives, the Hyborian Age, this story is considered by most Conan fans as an absolute classic. It also carries the honor of being regularly discussed by scholars of Howard's writing as one of his very best stories. I would most certainly agree. 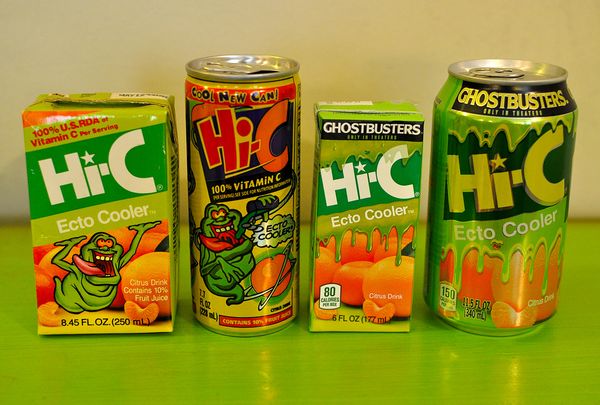 On September 15th, Coca-Cola filed a trademark for “Ecto Cooler”, sparking rumors all across the internet that the iconic citrus drink is going to make a comeback just in time

Kenner Toy history gathers in Cincinnati tomorrow with a full symposium and we here at CompleteSet look forward to a day filled with reunions, toys, and utterly interesting presentations! From its beginning in 1947, Kenner has been a major point of pride when it