Comic books, as we know them today, are one of the few truly American art forms. When it works, it perfectly marries the fields of the visual arts and writing in a way that cannot be duplicated in any other art form. But like much of art, lots of people think they can do it but it takes skill, dedication, knowledge and practice to do it well. Thankfully, there is a small but growing cottage industry of writers and creators that have produced books that demystify the process of creating comics and help foster the next potential superstar through guidance. Here are ten of the best “How To” books on the process and magic of creating comics.

Understanding Comics is a departure from the traditional “How To” format because it is also itself, a comic. All the lessons and discussions are presented in a visual form with captions and/or dialogue balloons. Understanding Comics is a great place to begin our list as it takes an academic approach to the medium as an art form and as a means of communication. The book details the vocabulary, traditions and format of the comics medium along with the variety of ways that these elements can be used. Author and artist Scott McCloud is considered by some fans to be the “Aristotle of Comics” for his extensive examination and exploration of the comic form.

How to Draw Comics The Marvel Way

Considered by many to be the grandfather of all “How To” books, How to Draw Comics The Marvel Way taught a whole generation of artists that there were two ways to draw comics: the Marvel Way and the “wrong” way. The book is filled with the bombastic text of Stan Lee and the artwork of Marvel staff artist Sal Buscema. The Marvel Way was one of the first to use the concept of circles, cylinders and squares as the building blocks for the human figure. It also advocated the use of the stick figure in the layout process.

One of many books created by the phenomenally talented artist and instructor, Burne Hogarth, Dynamic Figure Drawing is the absolute textbook for anyone who ever wanted to learn to draw the human figure realistically and with amazing clarity and motion that just leaps off the page. By providing sequential artists with a fine arts level introduction to drawing the figure from every conceivable point of view, Hogarth distilled years of teaching into the ultimate reference guide.

Will Eisner is considered the grandfather of the sequential form. Although best known for his seminal comic series, The Spirit, Eisner has created works that explore and expand what is possible in the form. In the Comics and Sequential Art book and its companion Graphic Storytelling and the Visual Narrative there are a number of essays that explain and detail all the nuances of graphic storytelling and the sequential arts. Rather than doing a straight how to draw approach, Eisner uses different chapters to cover different aspects of the comic creating process.

Prolific writer Brian Michael Bendis has done one of the most requested and potentially impossible to create instructional books with this one. Here, he produced an actual book on the process of comic book writing. Bendis takes us behind the proverbial curtain and forces the reader to not only examine the process of writing but also asks why a writer writes and why a writer would want to write comics.  Bendis examines the fact that the process of comic writing is in fact a collaboration in which the writer is writing to the artist first and it is only their collaboration that the comic reader sees. Bendis deftly breaks down the entire comic into its component parts and examines the people and processes of each. Then he does the one thing that so many “How To” books shy away from, he explores the business of writing and being a working comic book writer. Bendis is a writer at the top of his game in the industry and this book is a virtual historical document detailing his process of getting there.

The Complete Guide to Self-Publishing Comics: How to Create and Sell Comic Books, Manga, and Webcomics
Comfort Love and Adam Withers
Originally Published: 2015

The Complete Guide to Self Publishing Comics is written and illustrated by my comic creating friends Comfort Love and Adam Wither and it is indeed an accomplishment for the relatively new but most definitely industry savvy pair! These two created this book as they create their comics… together. And together, they created a book that, if you follow its tenets, learn its lessons, and pay attention to its Pro Tips; then it will be almost impossible for you to fail at publishing your own comic masterpiece. The book deftly covers every aspect of the comic process and shines a light of equal importance on every step of the process, including the often-dreaded aspects of the business and marketing side. The pair doesn’t sugar coat anything but instead gives a real world look at the world of comics by two people who have earned their stripes in the trenches of impending deadlines and long comic show weekends.

A statement that could be equally applied to his artwork, Bryan Hitch has taken a completely unique path in creating his “How To” book, the Ultimate Comics Studio. For Hitch, he sees himself as a storyteller rather than simply an artist. Following this paradigm, Hitch delves into the composition of the panels, the placement of the characters and the visualization and transformation of the script into a comic page in ways that are rarely done with this amount of detail. He also takes time to get into a discussion about sequential action and the rhythm of storytelling. He next gives the reader a shot by shot breakdown of pages from one of his Marvel Comics Fantastic Four stories. The tutorial plays out like the extras of a DVD, giving insight not only into his process but what appeals to him about storytelling. Composition is of key importance to Hitch as well. Where you place the camera and finding your focus within the panel are touched on and particular emphasis is given to how characters are placed. He even includes the often-neglected aspect of where to place the word balloons. I was especially impressed by the detailed emphasis toward creating and composing environments. Backgrounds can and have been given something of a second-class importance in some comics, but here, and especially when establishing the look of New York as the home of many of the Marvel heroes, the environment becomes a character unto itself. My favorite part of this book is the discussion on making the fantastical look and feel real, otherwise known as verisimilitude. One of the most important things in any story is to make the situation, no matter how far removed from reality, appear to be the most common place thing. Hitch handles these skills with the deftness of a true master of his field.

It is impossible to make any list that looks at “How To” art books without making mention of the incredibly prolific Christopher Hart. Covering a vast array of cartoon styles and genres, Hart helps beginners in each discipline to start from the earliest point and build a simple but solid foundation for their artwork. In the Cartoon Cool book, Hart takes a mixture of the Manga style that is so popular today and mixes it with the aesthetic of the 1950s, a time that embraced the futuristic promise of space travel and the clean lines of Art Deco style. The book details a variety of characters in this fused style that looks like a modern take on the best Saturday morning cartoons of our youth. One of the skills that Hart often uses that is in full effect here is the simple but effective breakdown system for each character that builds slowly with each step to achieve the desired result.

One of a trio of books created by the legendary writer, comic creator and raconteur Stan Lee, this is the ultimate writer’s guide, especially if you favor the style of writing that built the foundation of the comic book Marvel Universe. Using his typical boisterous style and anecdotes from his illustrious career, Lee lays out the processes of writing for the comic form. He goes into great detail on building the plot, creating heightened action to keep the reader engaged and peppering in convincing dialogue that ground these fantastic characters in the trials and tribulations of the real world. He helps the potential writer fill their own worlds with characters and environments that enrich the overall story. He also clues the reader in on valuable tips of the trade that come with years of building multiple worlds on paper. Lee also brings in several of his illustrious collaborators for their input and insights on writing. All in all, this really is the ultimate guide to writing from the quintessential comics writer.

One of five books created by DC Comics on the process of creating comics, this book is one of the first to ever focus on the process of digitally creating comics. Digital has invaded the comics industry in a big way, and it has its own set of rules and processes that are a definite learning curve for traditional comic artists. Freddie E Williams II offers a detailed but accessible tutorial on the process of every aspect of the digital creation process from the layout of the file, sketching using the design tools, laying out the panels and more. Williams helps the reader through the steps of penciling, inking and coloring a page and all the necessary details to make the comics print ready. The book helps people new to the digital process avoid many of the pitfalls that come with having to learn a program from scratch. It is far less of a how to draw book as it is a how to create book. This is an invaluable help to bring comic creating into the 21st Century.

There are quite literally hundreds of books out there on creating comics, each with their own opinions, specialties and processes. Because there are so many, there are always contradictions, differences of opinion on how to get from point A to point B and different ideas on what is the most important thing that makes the whole creation come together. What they all share is a desire to take an idea, cultivate it, help it grow and become a project for the whole world to enjoy. At their core, they are the engines that fuel imagination and hone it into beautiful reality. And, in my opinion, that is one of the most important things that any artist can do for another. Every author, those listed here and the hundreds that are not, should be applauded for their efforts.

We all know about the gold, silver, and bronze medals presented at each Olympics. But what is a bit lesser known is the fact that everyone who participates in the Olympic Games goes home with a medal. These medals are called participation medals and 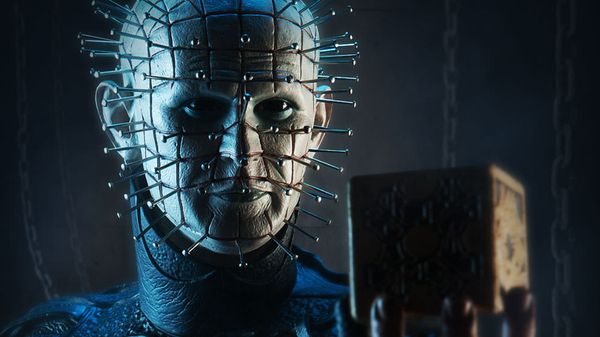 Underworld, or Transmutations, is a little-seen and mostly crummy horror movie from 1985. It’s got an alright premise, mutants vs gangster, and a script by horror fiction heavyweight Clive