In Magic: The Gathering, the "Power Nine" are nine near legendary cards which are incredibly rare, utterly valuable and hold the distinction of being printed very early in the game's long history. Considered by many to be overpowered cards when it comes to gameplay, that fact has not impacted their value or collectability. Magic, as a collectible card game, is still in production and actively played even today. If you are diving into collecting the cards, you might want to know that you are joining over twenty million players and questing after more than 13,500 cards.

To say this game has been a success would be a massive understatement and here, we proudly present the ten rarest Magic: The Gathering Cards!

Valued between $1,950 and $2,500, Timetwister is our first example of the Power 9 in this list. Artist Mark Tedin’s visuals shines just as the fighter in the image begins his fall from grace (and weaponry). In play this is a very interesting card as it allows all players to renew their hands completely even snatching up cards they’ve already played. The drawback, of course, is your opponents get the same benefits as you. The fact that you’re shuffling to obtain your hand of seven does randomize the impact a bit. Note that the Bazaar of Baghdad card from Arabian Nights and the Mishra’s Workshop card from Antiquities are nipping at the heels of this one in terms of value. For now though, it holds onto it’s #10 spot in our list.

Valued between $2,600 and $3,000, Tropical Island isn’t actually part of the legendary Power 9 but it is widely regarded as one of the most valuable Magic: The Gathering Cards putting it into most Top 10 lists and edging up to the #9 spot for ours. Containing serene, island art by Jesper Myrfors this pretty little card is incredibly useful for generating mana just when you need it most; especially if you are playing a green and blue mixed deck.

Valued solidly at $3,000, this is the first of five Mox cards in our list. Referred to collectively as The Moxes (or Moxen), these cards are powerful additions to any hand allowing for big plays to happen early in a game. All five Mox cards have been illustrated by Dan Frazier and feature different pieces of jewelry. Personally, I always thought the Emerald card had the best illustration of the set. I sold my Alpha copy of it last year.

Also valued solidly at $3,000, the playability of this card is very similar to the Emerald card above. Here the white mana get the benefit. Curious about that Mono Artifact designation on the card? That is a now obsolete term, which was only used in the early Alpha and Beta sets. It indicated that the abilities of the card had a cost, which required you to tap the artifact during play.

This is a Mox that is a bit on the move. Where the first two Mox in our list were pretty solidly rooted at $3,000 (and on a good day might be nailed down for a hundred or two less than that), the Mox Ruby is starting to edge up a bit crossing into the $3,100 range. It’s a subtle fluctuation but when the prices are as close as these Mox tend to be, any change is worth noting. Want artist Dan Frazier to sign your card? He’ll do it through the mail but he has a few restrictions.

The value of the Mox as a group of cards continues to climb and the Jet card is certainly helping. This card is priced regularly at $3,500. For that price, I certainly hope your deck is in need of black mana because this one will pump it out for you. You may be asking why these Mox cards are so sought after? Besides their scarcity and age, they were just darned useful. The five cards play much better than the land in terms of functioning as a source of mana without turn restrictions. In the early days (before use of these cards were limited), some players who had them would skip running land cards completely and simply kick four Mox cards into gear. Who needs land when you can wear jewelry? Ah, the days of MTG play when bling was king!

The power to control time, to take another turn… What would that be worth to you? If you said between $3,600 and $5,000 you would be reflecting the range of market sales well for this particular Alpha card. Used at the right moment, this card provided a one-two punch that could easily take out an unsuspecting opponent. If this card were not powerful enough, it initially read, “Target player loses next turn.” during play testing. This led to enough players thinking their opponent automatically lost the match once the card was played that the wording was altered for the Alpha set.

With any list, there can be only one but within the Mox section of our discussion the Mox Sapphire reigns supreme. Valued between $4,800 and $5,500, I guess those blue, blue waters of a copious blue mana pool have lured more than a few of us to put down the cash and add this bit of jewelry to our deck. This card’s price is fluctuating and climbing. Just over the last few months, it’s taken a significant jump on the secondary market with the higher end of that range looking pretty consistent over July and early August.

Depending on the day, this card fluctuates between the #3 and #2 spot as it’s value is a bit less volatile. That said, the value in question is holding pretty strong at the $5,000 mark. The power to draw 3 or force the draw of 3 cards is a potent force in game. Also, I edge out this one because I dearly love the Mayan inspired artwork of Mark Poole. Okay, it’s not just the artwork. It’s the slightly more consistent valuation that keeps it in the #2 spot, but really who’s counting? Well, I guess I am. Nonetheless, drawing cards is at the center of any game of Magic. The player who has the most options has the best chance of winning and this card has been much loved for consistently expanding those options as you battle your way to the top.

Ah, Christopher Rush. Did you know when you were drawing this simple flower that you were creating the undisputed Holy Grail of Magic: The Gathering Collecting?

Currently valued between $16,380 and $20,000, this is a card that can alter the course of more than just a game. That kind of money can have an impact on the life of the individual owning it. What makes this card even more desirable is the fact that the value over the last two years has almost doubled. It was trading around $10,000 in January of 2014. Now we’re seeing some places asking that almost shocking $20,000 price tag to add it to our deck (or safety deposit box, more likely). If you are looking for the card to own when it comes to Magic, it is the Black Lotus but it’s become so storied I almost bet you knew that fact before reading this article. For this list though, the grail stands identified.

Looking for a mountain of additional information regarding value considerations when it comes to Magic: The Gathering? Don’t miss our companion article, “A Deeper Quest For Magic The Gathering (MTG) Value When Listing Your Cards” In that article, we dive even deeper into this topic and give you a lot of angles to consider when building your collection. 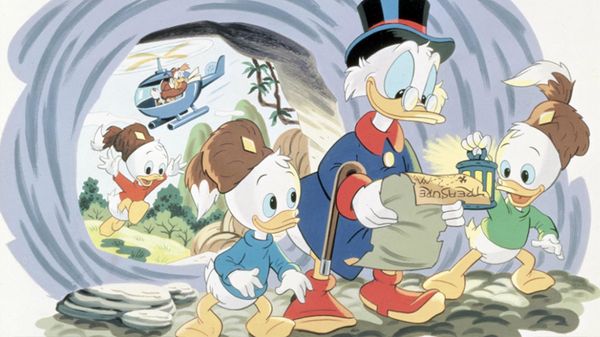 DuckTales has returned to us in our darkest hour. Scrooge McDuck slumbered beneath a mountain of gold and awoke just when we needed him most. On August 12 the one

If you've ever thought about creating your own comic books, start here.