Some people say that Funko Pop vinyl figures are the next Beanie Babies, a passing fad that will soon fade. It's not hard to see why. Although they retail for just $10 to $15 each online, in stores, and at events, there are some rare Funko Pop figures that are known to sell for much more. And by much more, I mean to the tune of hundreds or even thousands of dollars for a single Funko Pop. That seems crazy on the surface, and in that regard it's not unlike Ty's Beanie bonanza. Those who compare Funko Pop collecting to the 1990s Beanie Babies craze are missing something that makes Funko different though – fandom and exclusivity.

While most Beanie Babies were just cute stuffed animals that were sold in various stores, Funko Pop vinyl figures are based on society's most beloved entertainment and sports franchises. From talented musicians to unforgettable characters, Funko has acquired the licenses for nearly every movie, TV show, and professional sports team there is or ever has been. It's this pop culture connection that makes fans' bond to the products Funko creates so strong. It's also the reason that many of the rare Funko Pop figures have retained or appreciated in value once they're discontinued (or "vaulted" as Funko refers to this).

But nostalgia isn't the only reason for the success of Funko Pop as a collectible brand. It's also important to understand that the most expensive Funko Pop vinyl figures are often those that are exclusives. For those unfamiliar, an exclusive is a product only available at specific retailers or events (i.e. San Diego Comic Con). You'll find that just about every entry on this thoroughly researched list of the most valuable Funko Pop figures is an exclusive of some sort. What's more, most exclusives, especially those made for in-person events, are limited to low edition sizes. In fact, some of the most valuable Funko Pop figures exist in the single or low double digits making them exceedingly rare and thus expensive to own.

There's no denying that Funko Pop collectors are Funatic about their hobby, but it's clear that these small vinyl figures with large heads are unlikely to end up being monetarily worthless in a few years. Thanks to publicly available sales data from eBay and StockX, we were able to prepare this jaw-dropping list of the most expensive Funko Pop figures:

Darth Maul may be a short-lived character and underused villain in the Star Wars universe, but you wouldn't know it from the price of this rare Funko Pop figure. Released as an exclusive at San Diego Comic Con 2012, this vinyl bobble-head figure glows in the dark which is a nice treatment for what's intended to be a Star Wars hologram. Not only was this variant an exclusive to the world's largest comic convention, it was limited to an edition size of just 480 pieces.

What's it worth? You're going to need a lot of Imperial credits to add this figure to your Funko Pop Star Wars collection. According to recent sales, collectors are willing to pay as much as $3400 for this Holographic Darth Maul! On average, this figure sells for $2600 on the StockX marketplace. But another sold for $5,500 on eBay back in August 2020, so results may vary.

You may want to kill me after I admit that I've never seen an episode of Game of Thrones. I've never had HBO and never felt compelled to subscribe just to watch a single show. That said, I don't know much Ned Stark but I'm guessing someone really didn't like him judging by the bloodied and beheaded Funko Pop vinyl figure released of him at San Diego Comic Con 2013. Like most SDCC exclusives, it was limited edition and only 1008 were made. Is there some GoT significance to that number?

What's it worth? This is a cool-looking figure from a very popular franchise, so it's no surprise that it's become one of the most expensive Funko Pop vinyl figures on the secondary market. It has sold for $1,002 as recently as May 2020 on StockX and $1,699 on eBay in August 2020. If you're looking to add this rare Funko Pop figure to your collection, you can buy one on eBay here.

This metallic variant Funko Pop figure of the Martian from Mars Attack will have you saying "Ack! Ack! Ack!" when you hear what it sells for. As yet another San Diego Comic Con exclusive from 2012, it was limited to 480 pieces making it one of the rarest and most expensive Funko Pop figures on the market (if you can find one, that is).

What's it worth? The average sales price for this rare Funko Pop vinyl figure is $662 on StockX, but we also found one that sold as recently as October 2020 on eBay for the out of this world price of $1,150 USD. Take me to your leader, because I want a job where that eBay buyer works.

You'll find that many of the rarest Funko Pop figures are that of Funko's beloved mascot, Freddy Funko. As charming as Bob's Big Boy, Freddy Funko is a very versatile guy that's been transformed into a wide array of different characters. In this San Diego Comic Con 2016 exclusive available at Funko Fundays, Freddy Funko is dressed as good ol' Charlie Brown from Peanuts. As the box sticker denotes, only 500 pieces of this Freddy Funko were ever made which has made it difficult to find years later.

What's it worth? The price of this rare Funko Pop will have you exclaiming "Good grief!" at the top of your lungs. When sold on the secondary market, these guys sell for $4000 USD and up based on recent sales on eBay.

The first addition to the Funko Pop! Rocks line, this vinyl figure of the late Jimi Hendrix named after one of his popular songs is a fitting homage to the legendary musician. Unlike most entries on our list of the most expensive Funko Pop figures, it's here because of its status as a "Chase" edition. While the photo above is of the regular release, the Chase has a metallic body.

As you can see, Freddy Funko really can transform into just about any character imaginable, good or evil. With this San Diego Comic Con 2013 exclusive, Funko went with Batman's longtime nemesis, The Joker. With only 200 pieces of this rare Funko Pop figure out there, it's now as valuable as many of the vintage comic books the character is based on.

What's it worth? This grail last sold on eBay for a staggering $3,500 and the seller was kind enough to include a Pop! Stack case. Since there are so few in circulation, it doesn't come up often which explains the price.

Yet another SDCC 2013 exclusive, the Pop! Television Masters of the Universe #19 Skeletor with a metallic finish has appreciated in value since its release to become one of the most expensive Funko Pop figures. It was limited to 480 pieces like other SDCC exclusives from that year. Skeletor once said "Everything comes to he who waits… and I have waited so very long for this moment." which is a fitting quote for a character that's become such a valuable collectible decades after his 1980s debut.

What's it worth? Our research indicates that this rare SDCC exclusive Funko Pop figure can sell for as much as $2,895 USD based on this recent eBay sale.

With one of the lowest edition sizes of any Funko Pop figure that I've seen, only 24 of this #19 Freddy Funko as Heimdall figure were produced. This particular variant has brown skin which more closely resembles the Marvel Comics character. For those unfamiliar, Heimdall appears in comic books as well as five Marvel Cinematic Universe films.

What's it worth? If you own one of these, you're going to want someone like Heimdall guarding your collection because this extremely rare Funko Pop vinyl figure is now worth more than $3,000 USD based on recent eBay sales.

The Mandalorian premiered on November 12, 2019 via the Disney+ streaming service. As its become somewhat of a Star Wars tradition, merchandise for the highly anticipated show was made available prior to its premiere as part of the marketing campaign. This New York Comic Con 2019 exclusive bobble-head figure of the show's title character in a gunslinging pose was released in October 2019.

What's it worth? Despite being relatively new in comparison to the other figures on our list, the popularity of The Mandalorian has propelled the value of this exclusive like a jetpack carrying a bounty hunter. It's average sales price is now $250 to $350 based on its condition. Pop hunting is complicated hobby. Don't you agree?

Amazingly, this list of the most expensive Funko Pop figures is just a small assortment of many valuable collectibles in this ever-expanding line. With thousands of different Funko Pop vinyl figures released to date including hundreds of coveted exclusives, there are more holy grails than we can possibly cover in a single article. While their value may fluctuate over time, they're unlikely to depreciate by much due to the power of fandom and exclusivity that Funko wields so well.

There are three Christmas movies that I need to watch at least once per year during Christmastime: Home Alone, Die Hard (yes, it's a Christmas movie), and National Lampoon's Christmas 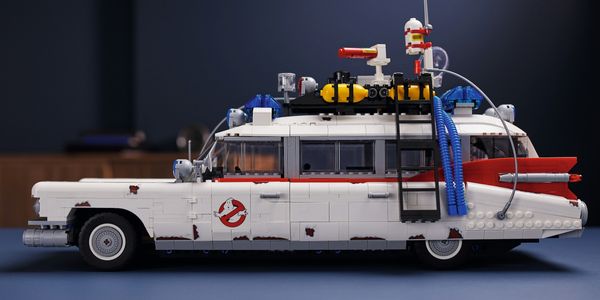 If there's something strange in your neighborhood, you need to build this amazing LEGO Ghostbusters Ecto-1 before its too late.