As we reported previously (and even teased a bit), in January Chris Carter and crew are returning with all the best elements, actors, and actresses from the original X-Files series. What's even better? We have the toy previews to prove the truth is still out there! These new action figures, Vinimates and Minimates, that are coming your way in 2016 sound as if they are just the the first collector abduction in a full scale alien invasion of toys headed our way.

Diamond Select Toys has just unveiled their upcoming 7" action figures for Mulder and Scully. They look fairly close in design to what we’ve seen this duo wearing in the preview footage. Of course, the version pictured below is just a prototype look and has not yet seen final approval (even though they are taking pre-orders).

Over on their Facebook page, Diamond Select Toys is currently fending off early comments regarding Scully's head sculpt explaining "they're prototypes, still pending approval, and will likely change slightly before production but we ran what we had because wanted to start gathering orders." I'm hoping that does spell some tweaking for her as the long face looks to long and thin to be Scully. That said, Mulder's sculpt looks rock solid.

Here's the official details from the manufacturer…

"A Diamond Select Toys Release! The monsters are back, and Mulder and Scully are there to face them! With the new 6-episode event series ready to re-open The X-Files for the world, DST is launching their line of X-Files Select action figures, featuring Mulder and Scully in their new mini-series looks. Each 7-inch action figure features up to 16 points of articulation, and comes packaged with character-specific weapons and accessories, as well as diorama parts, including an office floor and wall for Mulder and a desk and chair for Scully. Each figure comes packaged in display-ready Select packaging, with side-panel artwork for easy shelf reference. Sculpted by Gentle Giant Studios!"

"Two 7-inch-scale action figures of Mulder and Scully will kick off the X-Files Select line. Initial figures will be based on the new series, but there are plans to expand into the classic series, as well."

Pre-orders for the new figures are happening in many locations but BigBadToyStore has them priced at $41.99 ($8 less than the suggested retail price of $49.99) for the pair. The figures are set to arrive in fans' hands in May of 2016.

Let's jump to the official word on these two (which have a suggested retail price of $9.99 each) also...

"A Diamond Select Toys Release! Want to investigate the X-Files with some style? These stylized Vinimates PVC figures depict Mulder and Scully in their new looks from the 2016 mini-series, but captured in the geometric shapes of a Minimates mini-figure! Striking an action pose, with weapons at the ready, each 4” static figure has a ball-jointed neck, and comes packaged in a full-color window box."

Rounding out the toy announcements is a salute to the classic series in Minimate form! A two-pack of Minimates initially captured Mulder and Scully in their new miniseries look (as fully posable 2-inch mini-figures, of course). Now, we are pleased to share the X-Files Minimates Classic Box Set (Series 1) which will delight long time fans with the inclusion of the Cigarette Smoking Man and the ever creepy Flukeman.

To put is mildly, this is an amazing time to be an X-Files fan. Look for me glued to my television for the return, dusting off my set of the old collectible card game, donning my favorite Scully t-shirt, and gripping the edge of my seat as one of my favorite television series of all time returns!

There are no spoilers in this update, but if you have not seen Star Wars: The Force Awakens yet, you need to stop whatever you are doing and go see it now. Seriously, put down that mug of egg nog, stop singing those christmas 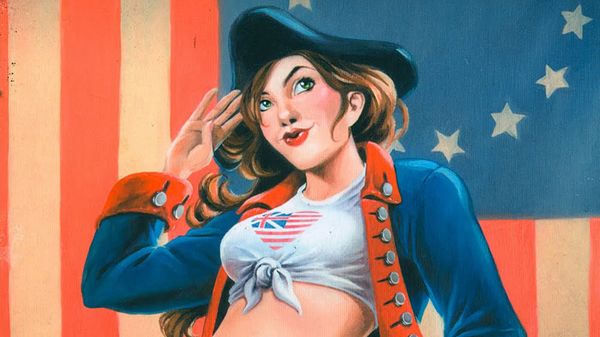 1. So who is Lora Innes? Lora Innes is a girl from Pittsburgh who moved to Ohio to attend art school and never went home. She met a boy there,