There is no debating the fact that I grew up an Atari kid. The commercials on Saturday Morning Television hooked me and in the late 1970s, I was begging my mom to take us to Sears and bring one of these bad boys home. I studied everything I could find in magazines devouring information about the initial nine games released. I had a subscription to Atari Age the moment I could get it in 1982 (having collected every bit of promo information I could find already). I even expanded my circle of "close friends" to include anyone who already had an Atari I could play alongside. Those little game cartridges and the plan to obtain more through any home business I could create was my obsession and I’m glad for it. In many ways, the memories I carry with me from that time serve as a baseline for my amazement when I reflect on just how far video games and their graphics have evolved today.

I hope this article tickles a few memories as I share some of the backstory on my 10 best Atari games and why I feel they were iconic. Join me as I roll back time to a simpler age where Pong was still impressive and Yars' Revenge felt like the epitome of video game excellence.

Defender released by Atari in 1982

Many will correctly argue that Defender II is the better game, but for me the original was still the best. I poured a ton of money into the coin-operated arcade version so I was excited to see it come to the Atari 2600. Though incredibly repetitive in nature, the Atari cart version would hold me for days on end. I was so enamored with it that I would track the high scores reported in the Atari newsletter of the time and one day I doubled down on breakfast and set out to capture the world record. Though it would almost destroy my joystick before I was done, I would do just that over the course of most of a day. Having my mom snap the polaroid, I mailed the photo into Atari and was listed in the next update as holding the record (for I believe 2-3 days). Flipping my little defender back and forth, nabbing the falling humans and keeping the world safe was a mission I was just the guy to achieve!

Adventure released by Atari in 1979

Grade school kids like to make up stories and Adventure makes my list simply due to the level of lore that grew around the game in my world. Even though I barely made it past of the gates of the castle the entire time I owned the cart, the amount of imagined narrative and discussion regarding what lay inside was eternally enticing. Though I never recovered the Enchanted Chalice from the evil wizard, the creative backstory of the dragon and the ever growing list of things my little white dot of a character could encounter, as imagined by my friends, kept me dreaming more than playing when it came to this one.

Of course Space Invaders had to be on the list. That said, my reasoning goes beyond the iconic association with the Atari brand. In the coin-op days this was a clear classic igniting a craze of fandom, but for the Atari version it it did something few other ports had to that point; it felt a little bit better than the original to me. Sure there were less aliens here but there was also 112 different ways to play the game within this cart. It felt that they had actually improved on the design with all the choices present and it made me feel like I could claim a bit of bragging rights for the console. This was something I wanted to do anytime I had the opportunity. I was a brand loyalist!

Wizard Of Wor Released by CBS Entertainment in 1982

When it comes to your basic multi-directional shooter arcade game, many people will point to Berzerk as the granddaddy to celebrate. Sure Evil Otto and his little bouncy smiley face was cool, but for me there was only one game that could take the throne. That game was Wizard Of Wor. It made it’s way to Atari two years after it debuted in the arcades and the little laughing wizard taunting you to fight on was a video game sound I've come to love over the years. Any time I visit a retro-gaming show (tip of the hat to the Louisville Arcade Expo), Wizard of Wor is one that I seek out, find a chair and dig into playing. The moment this one was available for home consumption I nabbed it. As far as retro gaming goes, this one has all the emotional attachment for me and takes me back to dimly lit arcades and going there with not just a few quarters but rolls fresh from the bank.

Asteroids released by Atari in 1981

My first real lesson in delayed gratification was a very hard one and involved this game. I was traveling by motor home to Walt Disney World with my father the year this came out. We had just finished a fun run at the parks and we were starting the long drive home when he pulled off for a break. Loving toys almost as much as I did, we would often wander the aisles of Children's Palace to get a break from the road. That summer I begged him to get me the cart. He gave in and what followed was an experience I remember to this day. I believe I held that box and dreamed about what it would be like to play it the entire ride home. I’m pretty sure my dad was very tired of the word Asteroids when we pulled back in the drive. Hint on how this story turns out… the game did not disappoint. Sure those original vector graphics were a bit chunky, but the gameplay was spot on and satisfyingly like the original. That said, this was a ride of wishing away the miles, wondering what the 66 ways to play the game would include and delayed gratification I resented at the time and will never forget.

Pitfall! released by Atari in 1982

Was this game in many ways the birthplace for side-scroller gaming? You could certainly make a case for it but what is not up for debate is the way in which this game cemented that genre. You could also make a case that this was one of the best games ever released for the Atari 2600. Poor old Pitfall Harry took more than a few tumbles while I was at the controls, but the way in which this game channeled a bit of that Indiana Jones adventure vibe was enough to keep me coming back week after week. Timing the vine swings, dodging the enemies… this one had it all and paved the way for an entire era of gaming fun that followed. Harry was one cool character and he was also one of the best-selling games ever produced for the Atari 2600 with over over 4 million copies sold.

Frogger released by Parker Brothers in 1982

Easily one of the more addictive games to ever come to the console, what I lack in a good story was more than balanced by the number of hours I spent trying to get this famous amphibian safely home. I especially liked the fact that this game bypassed the use of buttons making it just a bit more relaxing to play one handed. Okay, you know maybe I do have a story as, for a time, I was pretty good at playing Frogger on two consoles sitting side by side simultaneously one controller in each hand. This one was really such a simple game conceptually and it has stood the test of time as derivative versions are still delighting people on phones everywhere even today. A bit of a masterpiece and not a bad port for the Atari 2600 even back then.

Centipede released by Atari in 1982

I loved that trackball approach offered up by the coin-op version. Even though  it did pinch the skin of my fingers sometimes when I really got going hunting that mischievous spider, the game was addictive and one I had to have in my home. Sure, it was a bit of a concession to drop down to a joystick on the Atari 2600 but it was a small one. Here, the fast paced action and easy to learn basic concepts of the game still show through. This vertically oriented shoot 'em up arcade game deserves the accolades it’s earned over the years. Sure the mushrooms were just pixel blocks on the Atari but the centipede and spider were just as fun as the original and had me yelling at the screen just like in the arcade.

Yars' Revenge released by Atari in 1982

What was the best selling title for the 2600? You might have guessed with the big graphical hint just above these words that it was Yars' Revenge and you would be right. It earned those honors on the back of solid gameplay, graphics that seemed to push the platform and sound effects that kept you coming back for more. This was a game that felt original and really showed off how a property created with this console in mind could achieve. Here you’re chewing and shooting your way through a barrier to strike at the Qotile, the big bad of the game. Beautifully executed and even more fun to play, Yars' Revenge was an absolute Atari classic in every sense of the word.

Combat released by Atari in 1977

I feel like I'm ending this article right back where we began. If there were a ten to one order to this list list, Combat would be the game that came in first. It was packed-in with the system and crammed full of fun as it forced you to have a partner to play. Two-player only, this was my first experience really understanding the concept of social gaming and it was irresistibly hard to put down when I had a friend visiting. I’ve rarely laughed more and had a better time killing my buddies again and again than I did in Combat. Even just the cover gets me reminiscing for time spent with friends bouncing shots off walls and learning that perfect spot to eliminate your opponent again and again as they re-spawned. It's the game we all knew and in my opinion a perfect example of what made the Atari 2600 fun. 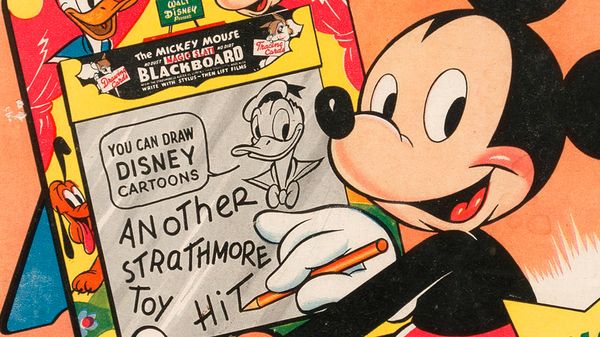 Spy stories are great. They're great when they’re intricate, gritty thrillers and they’re great as cartoony, action romps. Some of the best parts of these stories are the

As a comic book critic, the most frequently asked question I get about comic books is "Where do I start?" With this in mind, I had the idea to do