I don’t think any of us could have foreseen the movie that was raging down the highway toward us when we witnessed Mad Max return with Fury Road. It was just a few weeks shy of 30 years since the last film was in the theater, but after watching this film I was near speechless. That said, I still had three simple words to share on social media… Near (1) Perfect (2) Film (3). Like so many of my friends (and my wife), I was not alone wanting to immediately watch it again. According to Box Office Mojo, the film took in $153,636,354 domestic with an additional $221,100,000 foreign bringing home a massive $374,736,354 worldwide. This made it the most successful film in the franchise’s history (but you can visit Forbes for even more on the film’s success).

This isn’t an article about numbers. You can get those anywhere. You come to CompleteSet because we find different angles to share with you. Let’s start this by asking if you are familiar with Weta Workshop. You may recognize them as having the massive Smaug dragon at last year’s New York Comic Con or the equally impressive (and multi-fronted) Warcraft display at this year’s San Diego Comic Con.

Weta Workshop, unlike many others companies producing prop replicas and statues for collectors, are honestly more a part of the film industry than a merchandising company. I could walk you through their credentials, but it’s actually much more fun to encourage you to check out their own timeline and see just how many films they played a part in making over the years. I’ll tip a hat to The Hobbit films, Godzilla, Elysium, Man of Steel, Spider-Man, Hellboy, and the Lord of the Rings trilogy just to name a few. For me though, their work helping build Mad Max: Fury Road got me excited enough to put keyboard to digital page.

For Fury Road, Weta was invited into the film design process very early. The movie was just a series of storyboards when their team flew out to Sydney to get a feel for the broader plan. Returning home, they began mapping out the conceptual design for the film with particular focus on costuming, makeup, vehicles, and environment. Their impact cannot be understated as the visual side made this film staggering to see and gave the story such a unique edge. I would go so far as to argue that only the camera work, acting, and frenetic pace had as much of an impact as the folks at Weta. This was action amped up to 11, but it also had a look and feel that swept you into a world you wanted to experience again and again. Simply put, it looked damned cool.

Before I go any further, I invite you to take just under eight minutes and watch this video put together by fxguide as part of a broader story about the filming. It and the story are loaded with visual elements from the initial design work that must be seen. Here’s but a taste…

Weta Workshop took shape in 1987 under the name RT Effects. The company was started by Richard Taylor (5 academy awards to his credit so far) and Tania Rodger. After doing a few films, the company made an early name for themselves working on the TV series Hercules: The Legendary Journeys and Xena: Warrior Princess. They took on and entirely new level of respect industry wide after Peter Jackson tapped them to produce sets, costumes, armor, weapons, creatures, and miniatures for The Lord of the Rings (thank you wikipedia). Ever since, they’ve only grown within the industry. They launched a digital arm to their endeavors in 1993, and established themselves as a multi-award winning design studio and physical manufacturing facility. They’re also no stranger to the collectibles market bringing their excellence to products you can take home in celebration of the many films with which they’ve worked. Personally, I’m on the hunt for long sold out Doctor and Davros, but that’s just me.

So, now that you have a better handle on the Weta Workshop and Mad Max connection, I will not pause to celebrate the War Boys, cower before Immortan Joe, or go on and on and on about how glorious Imperator Furiosa was in within this film. I will simply ask, when is this guy going to get his spin-off franchise?

That’s a movie I want to see! 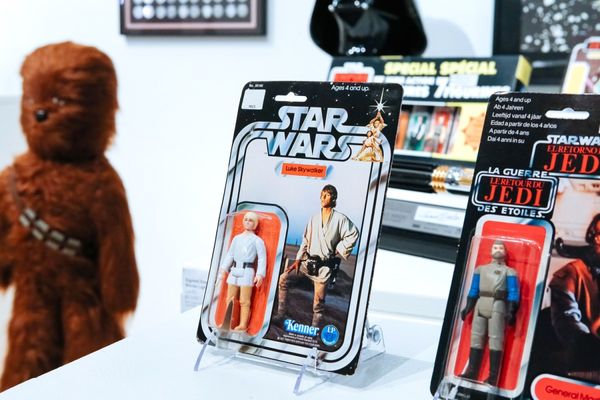 In a 2008 interview [https://www.youtube.com/watch?v=waKYV9YJpBI] with Style.com, Japanese fashion designer Tomoaki Nagao showed off his incredible collection of Star Wars memorabilia. Aside from