The character of Batman was created in 1939 by Bob Kane and Bill Finger for Detective Comics #27. The Dark Knight has helmed multiple comics simultaneously and has starred in films that have made billions of dollars worldwide. The concept of Batman known nearly worldwide. Two bullets ring out into the night from a random muggers gun, leaving young Bruce Wayne kneeling in the blood of his slain socialite parents. He later vows at their graves to strike out against all crime and spends many years training his mind and body to the peak of human perfection until he was ready with the means but not the method to his quest. Brooding one lightning swept evening in his father’s study, a bat crashes through the window and rests on a bust of his father. Bruce sees this as an omen and Bruce vows to become a bat, and thus Batman was born.

The idea of Batman is one that can mold to the time it exists in. All criminals are a superstitious and cowardly lot, no matter what time period it is. So every period of time can use a Batman. But it isn’t always a Batman that we recognize.

Batman had seemingly been killed by the Omega Beams of the intergalactic villain Darkseid, but they, in fact, unhinged the hero in time and sent him hurtling back to one of the earliest eras of mankind and he was then pulled into different eras until eventually making his back to own time where he defeats the evil Darkseid with the help of his friends in the Justice League and time traveler Rip Hunter. This series of four figures details his journey through time.

The caveman Batman features the impressive bat cloak that is a full headpiece with the mouth of the animal resting on Bruce’s head. He wears a loincloth with a makeshift “utility belt” with rope and pouches attached to it. He also has fur wrist cuffs and boots tied on with rope but is otherwise uncovered. He is snarling wildly. He carries a stone knife and a large club and is standing in a fighting posture ready to strike. The Puritan “Witch Hunter” is dressed more in keeping with his times with the high buckled hat and cloak but there are subtle “bat” motifs to the look. This Bruce also has a version of the “utility belt” slung across his chest, with ropes, vials and a variety of other items. And while this one is also unmasked, his hat shrouds his face well. The Pirate Batman is the first of the four to wear a mask, along with a full beard and a three-cornered pirate hat. His full body coat is even more scalped at its ends, giving it the feel of the eventual cape and a fully pouched belt lays across his chest including the holster for his blunderbuss gun and his saber whose pummel has definite bat features. The final figure is the Wild West Batman and he is very close to the hero that he would eventually be. He is masked and carries no guns, only a whip. His jacket points violently up at the shoulders and scalps at the chest and at the edges making him appear to be a much larger and more imposing target than he is. The purely black outfit would see him disappear under the dark evening sky. A smaller but still omnipresent “utility belt” sits on his waist.

When Barry Allen created the Flashpoint, his actions created multiple unforeseen ripples that deeply affected the lives of his friends and fellow heroes. One saw a single bullet fly from a mugger’s’ gun instead of two and this time, a young Bruce Wayne lay dead at the feet of his devastated parents. Her sanity shattered by the experience, Martha Wayne goes on to become the Joker. Thomas Wayne becomes the Batman, a vicious and brutal avenger for this equally vicious world who very little difficulty dealing out the harshest of justice.

The Flashpoint Batman outfit looks far more militaristic than it’s main universe counterpart, giving it the feeling that it is made up of items that were cobbled together by necessity rather than created for a specific purpose. The outfit is a light gray in color. All of the protective gear is strapped to the outside of his body, instead of hidden inside his armor. Knee pads, gauntlets, ribs and shoulders are protected with thick military grade padding. An oddly bright orange utility belt with large pouches is around his waist and has two holsters on each hip that strap to each leg. Standard thick combat boots complete this very military style outfit which only indicates the hero by a simple bat emblem on a small orange background. Completely out of place with this otherwise standard, mostly military outfit is the cowl and cape of the Batman. The cowl has short “ears” and leaves only his unshaven chin visible and terminates at the shoulders and flows into a long leather cape that flutters behind the figure. The figure is based on a gray stone tower with golden gargoyles all around. Finally, the figure is armed with two large guns, which are the preferred weapon of this particular incarnation of the character and a huge gold and silver sword with orange at its handle, which plays up the aspects of the Knight part of the character.

The identity of this man is unknown but he saw his parents gunned down by the Stalin led police force in Communist Russia and he vowed vengeance on them all and on the police captain, Pyotr Roslov, in particular. Twenty years later, he became the greatest thorn in the side of Stalin’s regime that the dictator had ever known. He took particular interest in committing acts of terror against the collectivist utopia forced on the people by the alien Superman. This Batman became a hero to the oppressed people and through the first Batman had to take his own life to avoid capture, more Batmen rose up to fight the tyranny.

The core basis of this outfit is not unlike what you’d expect anyone to wear in the freezing cold of a Russian winter. His thick woolen outfit, leather gloves, and boots are not unlike those worn by current military personnel. Leather pouches are attached strategically to the outfit at the chest just below a simple bat emblem and above a standard belt with a holster. His cowl appears to be made primarily from his thick fur hat with the “ears” popping out just above the fur and his mask sitting just below. Flaps hang down to cover his actual ears and the piece attaches to a tattered leather cape that looks like it was ripped off of something rather than fashioned that way. The figure holds a grappling weapon with a bat motif as its head and he stands astride the broken stone symbol of the Communist Superman.

After discovering a series of murder victims with their throats slashed, Batman encounters the actual Lord of the Vampires himself, Dracula, who has assembled a number of followers in Gotham City. Exhausting every other option, Batman had to succumb to a vampire’s bite himself to get the necessary strength to defeat Dracula. He lured the Vampire Lord and his minions to the Batcave and then he detonated several explosives causing the caves to collapse and Wayne Manor to collapse into the caves as well. Then Batman staked Dracula to a tree just as he was draining the last of the hero’s blood from his body. Then, the vampiric Batman rose and assured his grieving friend and butler Alfred that although Bruce Wayne had died, Batman would go on forever.

The figure is less wearing the costume then now is the costume. It has become like a living thing that he inhabits. The “ears” of the cowl telescope above it and the face of it is drawn in a snarl tightly as if it were skin. Batman’s face is chalk white, his eyes burn red and his teeth are all sharp fangs. On the back of the tightly wrapped cloak has long sharp spines. The cloak itself seems to have doubled in length as it wraps one tentacle of cloth around Bruce Wayne’s own red gravestone. In one claw-like hand, he holds a sharpened wooden stake and in the other a red skull. The figure stands on a rocky base. On it is the aforementioned gravestone and a small coffin filled with more red skulls. This is a Batman that may be damned but because of his indomitable will, he is not completely doomed.

Batman generally tops the list of everyone’s favorite superhero. And one of the main reasons for that is that we imagine that we too could be Batman. We weren’t rocketed as a baby from a dying world, born with a mutant power or bitten by a radioactive spider, but if we were rich enough, were determined enough and worked hard enough, we too, could be Batman. The Batman mythos fits in a lot of different stories and just maybe, one of those could be ours. 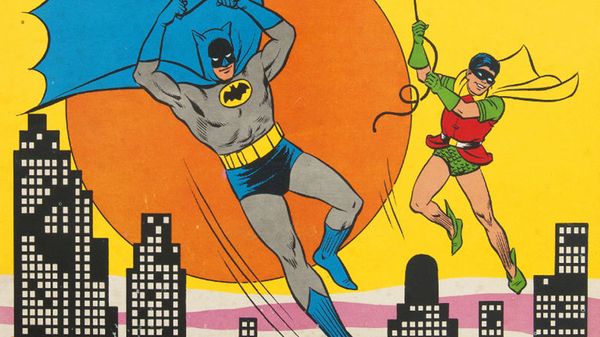 At the center of every good story, you can almost always find a dynamic duo that makes things go right (or wrong). From partners in crime to goofy best friends,

As a young boy, Dan Polydoris dreamed of growing up to be the prince of Eternia [https://en.wikipedia.org/wiki/Eternia], and ride around on a green tiger. Fortunately for the world of collectors (and thanks to his cat-allergy and lack of confidence