This little column series is cranking right along as we enter Round 3, featuring a series of new stops in the history of comic books. Should you need it, we have an introductory article to get you started and you can still check out the comics previously discussed in Round 1 and Round 2. With that out of the way, let’s return to Tony Isabella’s 1,000 Comic Books You Must Read for four more issues!

I love the classic Gil Kane artwork that is highlighted in this issue. He is an artist whose visual style feels iconic to the 60s for me. This one stands out particularly for its re-imagining of the classic Atom character in the guise of Ray Palmer, the best known of all the Atoms over the years. Kane was no stranger to re-invention, having already played a major role in framing the modern version of Green Lantern and would, many years later, co-create the character Iron Fist.

Prior to this story, the Atom was a member of the Justice Society of America and was quite different from the modern hero. He was notably short in stature, a college student, and later a physicist. He was a “tough guy” who made it acceptable to be short and still make a difference, an edgy topic for the time, however tame by today’s standards. That character, Al Pratt, went on to develop an atomic punch, but never rivaled the notoriety of the shrinking Atom we all now know so well.

Showcase #34 told the tale it needed to tell, but felt overly simplistic even though worked to ground the Atom in the science of the time. If you remember last round, I discussed how Detective Comics #327 surprised me given my preconceptions of how a comic from that era should read, narratively speaking. Here I got exactly what I thought was coming from a 60s comic, and it left me disappointed. I was looking for something that felt a bit more iconic and a lot less hollow.

The issue told the tale, but felt devoid of a deeper emotion despite the Atom’s desire to impress Jean Loring, his future wife. The inner monologues felt forced and only there to explain things to the reader. Overall the origin felt like it had room for much more story, squandering that potential and leaving me wanting more.

What an unexpected gem of an issue! I feel sincerely sad to have missed supporting this book with a purchase back in the day. I should have known anything with the words Gail Simone attached would be rock solid, but suffice it to say I was impressed.

In this tale, Tranquility is a town where old heroes and villains go to live out their final days. Dementia rules, mystery is afoot, and a murder kicks things off as we, the reader, are left with a clear sense of wanting to see how it all plays out. What struck me quickly here is just how much personality we see in these pages. The characters don’t feel cut from a mold and they are, in the pages of a single issue, very quickly relatable. Compared to much of the star artist and deep grit driven series Windstorm (an imprint of DC Comics) was putting out during this period, I can say this series feels different. Quite simply… special.

Fans of the now classic Syfy channel show Eureka will especially want to take note here as the flavor instantly reminded me of those stories.  There is a female sheriff at the heart of the tale and her story seems clearly intertwined with the broader narrative and it just works. Replace the mad scientists of Eureka with retired metahumans known as “Maxis” and you have the Eureka to Tranquility transition.  This first issue of the series convinced me that I needed to find the rest.  Fun, fresh, and an interesting read.

Issues rarely get more classic than one that serves up the first appearance of a true cornerstone of the DCU. Here we welcome Wonder Woman. Considered one of the “trinity” of the DC Universe (alongside Batman and Superman), Wonder Woman has been many things to many fans including an iconic hero, an exemplar of the feminist movement, and a continuing symbol of female empowerment. She is more than just a hero as was so aptly pointed out in the 2012 documentary Wonder Women! The Untold Story of American Superheroines, a must see film just as much as this is a must read issue.

Though just an eight page backup to the main Justice Society feature, her origin story steals the show for me. Unexpectedly sexy and playful in the costume choices, I was entranced by these pages that wove comic panels with a book like narrative story. Rooted in the war era, yet almost progressive in some of its thinking on women (for the time anyway) it was a fun little read.

What really surprised me was just how loaded up this issue was with story content. Coming in at 60+ pages, they were really able to draw out the individual stories of each hero and their individual quest to solve the mystery of Doctor Elba. With a story title like “Two New Members Win Their Spurs”, how could you not love it?

It was also great to see such touchstone moments in the main story like Doctor Mid-Nite and Starman formally joining the Justice Society of America, Doctor Fate dawning his helmet, Shiera (Hawkgirl) Sanders grabbing a cameo, and so much more. Sure these stories feel very dated, but there is an innocence here that is honestly worth enjoying and I did, page after page.

This issue features an origin story (the Sandman) and two guys drinking in a bar. It’s really that simple, yet it’s also utterly marvelous (pun intended). Here, the focus is on the Sandman lamenting his life and the bad decisions he’s made. The world thinks Sandman is dead and as he debates what to do next his very personal story unfolds. Not long after he begins, the Thing joins him at the bar, shares a Miller, and the two crank out some bar stool wisdom.

The story is quaint (as many of the Two-In-One tales usually are), but the sadness of Sandman is palpable and moving. Here, he doesn’t care what comes next and is ready to go to jail without a fight. The story breaks some of the normal tropes as these two brawlers don’t tear the place down during their extended conversation. Tony Isabella describes this issue as “one of my all-time favorite super-hero comics” and I have to agree. This was an extremely solid, charming, and comfortable read.

This issue also features a backup story starring the Impossible Man (along with the Impossible Woman and Impossible Kids). They’re looking for a new home world and are up to their usual brand of gag filled silliness. That said, this second story provides a nice counterbalance to the initial, deeply moving Sandman tale. A nice slice of vintage early 80’s comics at it’s best even if it found a home in an unexpected series. 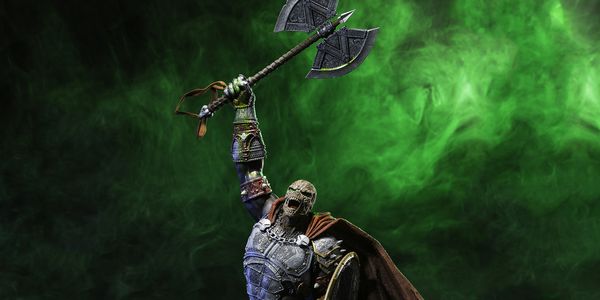 Every once in a while there is a statue that arrives which simply makes you stop and stare. This time the tip of the hat goes to Spawn and McFarlane 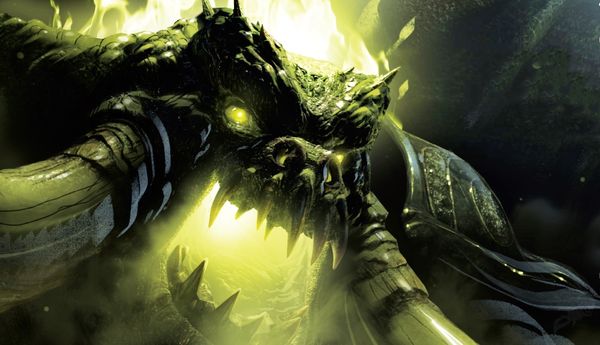 Just a little over eleven years ago, the world was introduced to a new massively multiplayer online role-playing game (MMORPG) named World of Warcraft. It was the fourth installment of