To call this book phenomenal is akin to calling the Empire State Building tall… the word simply isn’t big enough! The DC Super Heroes: The Ultimate Pop-Up Book is an absolute extravaganza for the eyes. It is choke full of character information and origin tidbits that not only serve to quickly bring any new comic reader up to speed but also gives the comic veteran a new take on familiar tales. The trinity of the DC heroes: Superman, Batman and Wonder Woman, as well as many of their allies and adversaries are well represented. One page is completely devoted to the villains and cosmic terrors of the DCU. Many heroic highpoints quite literally leap off the page for the reader to enjoy but the real stars of the show are the pop-ups.

Each pop-up is an engineering marvel created by Matthew Reinhart. Mr. Reinhart picked not just a classic pose that perfectly fit each character but presented them in a way that the movement of the pages serves up an almost kinetic quality that, for an amazing second, makes the figures actually appear to be in motion. Mr. Reinhart also made a number of incredibly inspired design choices. The accordion fold to Batman’s cape that, when opened, creates a perfectly scalped edge harkening back to the days of Neal Adams. In those days, the cape was as much a body wrapping cloak as simple superhero attire. Wonder Woman’s Magic Lasso is made of actual string that seems to twirl when the page is opened. Portions of the Invisible Jet are even transparent! On the very first page, Superman springs from the roof of the Daily Planet, seeming to unfurl from his massive chest symbol. Iconic is just too short a word to describe it. As an extra special surprise, the Bat Signal actually lights up!

Surprises are the name of the game with this book. Each page, in addition to the awe-inspiring main design, has two or sometimes three additional flaps. At first look these are simple character information boxes, but opening them reveals additional pop-ups and in some cases, two. These smaller pop-ups feature everything from additional character information and imagery to the characters chief opponent or greatest moment. They also reveal a veritable who’s who of characters, featuring members of the Justice League, the Justice Society and the Teen Titans.

The last page of this book was absolutely without equal! It is a massive three dimensional sculpture that portrays a battle royal with over 40 DC heroes and villains going at it. Each hero deals with at least one or more of their dastardliest villains. Popular characters like Booster Gold, the Flash and the Blue Beetle are in the fray and lesser known heroes like Adam Strange, Deadman and Batwoman are right behind them against the likes of the corrosive Chemo, Mongul, the cosmic dictator and the frigid Mr. Freeze. A very large part of me wants to leave this last page open forever and put it on a shelf to just stare at all day. It is the ultimate comic book scene and even features an un-credited appearance by a certain pair of purple clad twins preparing to activate. This is definitely a book that will appeal to both the young reader and the old collector equally. 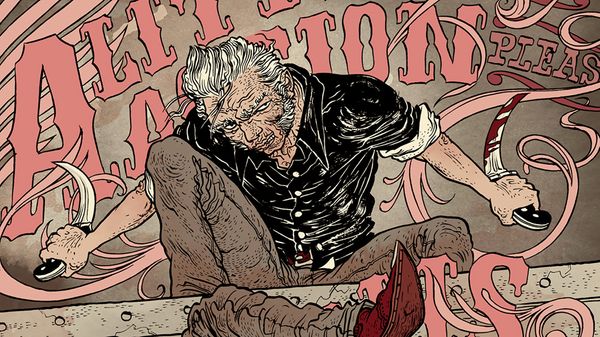 Down in Charlotte, NC there's a wonderful comic convention called HeroesCon. It was at this show that I first met my friend, Chris Pitzer. A graphic designer by trade, Pitzer

What could summon up the masses and ensure the eighth most-funded board game of all time on kickstarter? What’s being released today (11/11/2015) across the country via Cryptozoic Entertainment? The correct correct question here really isn’t “what” but rather “who”