For fans and collectors of the long-running British science fiction franchise, Doctor Who merchandise has a long history and a diverse range of products, from books to games, from Dalekmania in the 60s to Big Finish audios in the 21st century. Although many collectors and fans believe Doctor Who action figures were a more recent addition with the series revival in 2005, this is not the case – in fact, there has been a long, and very tumultuous, history behind this aspect of Doctor Who collectibles. So let’s hop aboard our TARDIS and head through a short, fragmented – yet fascinating – history of Doctor Who Action Figures.

Although Louis Marx dominated Doctor Who merchandise with a variety of Dalek-related toys, it was not until the mid-70s (and Tom Baker’s popularity as the Fourth Doctor) when the first line of Doctor Who action figures were released. Initial figures by Denys Fisher (referred to as Mego figures in the US) included the Fourth Doctor, Leela, K-9, and the Giant Robot (from Tom Baker’s 1974 debut Robot). Other Doctor Who action figures in this range included a Cyberman, a Dalek, and a TARDIS.

The Tardis was a particularly interesting piece of Denys Fisher/Mego-released Doctor Who merchandise. Much like Mego’s Star Trek “transporter”, the Denys Fisher/Mego TARDIS allowed someone to “dematerialize” their figures with a push of a button. (Twist the lamp at the top of the TARDIS, and pressing one button would make the figure disappear; the other would make it reappear).

Alongside the Denys Fisher/Mego line, it is worth noting that a Talking K-9 was released by Polity in 1975. This collectible actually had a small plastic record inside allowing K-9 to utter various phrases when the control panel on his back was pressed.

One of the more interesting aspects of this initial run – a theme which ran throughout the history of Doctor Who action figures – is that many items contain production errors and quality control issues. For example, some runs of the Leela action figure were missing key parts of her wardrobe, with some runs of the figure were inappropriately colored. The TARDIS was easily damaged, and that Talking K9 might not work with a good jolt.  As a result, these items of Doctor Who merchandise can be quite rare, increasing their collectible status.

Many collectors treasure and seek out Dapol’s Doctor Who action figures, initially released in 1988 to celebrate the show’s 25th anniversary. Part of Dapol’s initial run included the Seventh Doctor with cream-colored jacket (as portrayed by Sylvester McCoy) and Mel, a Tetrap (from the Doctor Who story Time and the Rani), K9, and a TARDIS commemorative play set (containing a Police Box which opened up into a control room, a plastic base, and a moveable console with flashing lights and a moving time rotor).

Much like Denys Fisher/Mego, Dapol’s initial run of Doctor Who merchandise contained a variety of production errors, affecting their collectable status. One of these errors was a five-sided TARDIS console, which was “fixed” in later reissues. (The second TARDIS playset’s console had six sides, and provided sounds as well as lights and movement). This set also contained a K9 painted green rather than gray, thanks to a misinterpretation of a production photo.

Dapol released a second wave of Doctor Who action figures in 1989, on the cusp of the series’ cancellation. This wave included another Seventh Doctor figure (in a brown jacket), the Fourth Doctor (Tom Baker), Ace, Mel, a Cyberman, and an Ice Warrior (featured in Doctor Who episodes such as Curse of Peladon and Seeds of Death), as well as three Dalek variants (including a Red Dalek from the 1960’s Peter Cushing films) and Davros (from Genesis of the Daleks).

This next wave of merchandise was also not without production errors: the initial run of Davros action figures showed the figure with two arms which articulated (leading many collectors to “snap off” one of the arms to make it more realistic), and the Daleks often had problems with articulation (solved with better joints in later runs of the figures).

Unfortunately, Dapol’s next wave of Doctor Who action figures was delayed until 1998 due to a fire at a production facility. However, the 1998 wave focused on characters from early 1970s-era Doctor Who. Figures included the Third Doctor (as played by Jon Pertwee), the Master (as played by Roger Delgado), two Silurians, Sea Devil, and a gold Dalek (as seen in the 1960s Peter Cushing movies).

In 1999, Dapol issued the last of its figures, including another Dalek, two types of Sontaran (from Doctor Who episodes like The Time Warrior, The Invasion of Time, and The Two Doctors) and the Melkur (from The Keeper of Traken). Dapol also released a series of 4 inch statues focused on the Second Doctor (as portrayed by Patrick Troughton) and a Cyberman from The Moonrise along with a mix of other special releases.

Specializing in die-cast models, Corgi released a limited number of collectibles to celebrate Doctor Who’s 40th anniversary in 2003. Their model of Bessie, the Third Doctor’s Edwardian roadster, was included in the British Special Edition of The Three Doctors. Corgi also released a number of limited edition sets, including a run of 5,000 TARDIS Gift sets and a 40th Anniversary Gift “film can” set, a limited edition UNIT Helicopter and Jeep Set (which included a Gold Dalek), a Doctor Who 3 Piece Dalek Set and the Remembrance Set. Figures released by Corgi included Doctor Who Tardis and K9, a Dalek and Cyberman twin pack, the Fourth Doctor, Davros and, of course, Bessie.

Best known for its Space: 1999 Eagle replica, Product Enterprise also produced a limited run of Doctor Who merchandise in the early 2000s. (Although calling them “action figures” might be a bit misleading). Focused primarily on Daleks, Product Enterprise’s output included a run of six-inch “Talking” Daleks, as well as “Talking” versions of Cybermen and the Fourth Doctor (with K9). The company also released several 2.5 inch “Roll-A-Matic” Daleks, and large, remote-controlled versions of Daleks and Davros. Despite their releases, Product Enterprise soon went defunct, and the company was taken over by Sixteen/Twelve, with no new releases since 2008.

With the Fourth series, Character Options brought some unique features and added value to their range of Doctor Who action figures. Now figures had a “Collect and Build” option where collectors could buy specific figures packaged with one part of a particular bonus figure. With these pieces, collectors could create a new action figure – for this range, it was a Vespiform (featured in the Doctor Who episode The Unicorn and the Wasp); a Fifth Series range included a “Collect and Build” option for the Pandorica cube (from the two part The Pandorica Opens/The Big Bang).

In 2008, Character Options also began creating a series of action figure sets based on various classic Doctor Who episodes, including Pyramids of Mars, Image of the Fendahl, The Keeper of Traken, and The Caves of Androzani.

Interested in learning more? Seek out BBC Home Video’s Doctor Who: The Aztecs – Special Edition DVD. One of the DVD backup features is a 22-minute documentary called The Doctor Forever – The Celestial Toyroom, focusing on Doctor Who action figures and other collectibles.

There have been a lot of great FunKo Mystery Mini [https://www.completeset.com/set/mystery-minis/items] sets released over the past few years, and some of my favorites are the superhero themed sets. Mystery Minis are blind box vinyl toys featuring small figurines 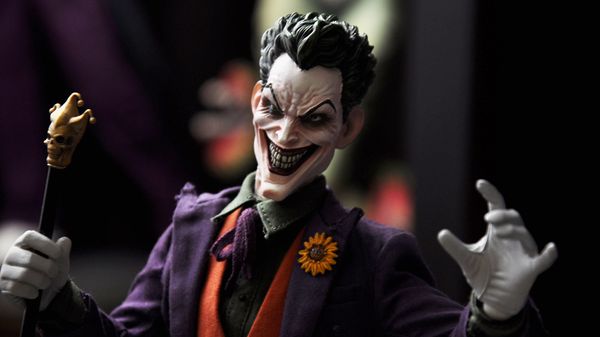