Did you know that the first Power Rangers series was actually adapted from fourteenth Super Sentai series? Kyoryu Sentai ZyuRanger, upon which Power Rangers is based, premiered in 1992. That is 17 years after Himitsu Sentai Goranger, the very first Super Sentai series, debuted in 1975. Super Sentai, like Kamen Rider, Kikaider, and Inazuman, is a Shotaro Ishinomori creation. However, Sentai is a bit lighter and softer than those other Ishinomori works. The Gorangers weren’t tortured heroes battling their creators. They were color-coded secret agents that rode around in a rainbow themed hot air balloon and defeated the monsters of the Black Cross Army by kicking a soccer ball into them.

It’s clear that Super Sentai didn’t arrive fully formed, in fact, it wouldn’t earn that Super adjective until the third installment, Battle Fever J. The suits probably look a bit strange to people used to Power Rangers or even just post-1970s Super Sentai. In the beginning, the suits weren’t quite as sleek as they’d get. They’re baggier with zippers running down the front. The silhouettes are broken up with tall Dracula-esque colors and butt length capes. The helmets are big and bulbous with enormous visors and numbers on the forehead.

However, there is an element missing that is far more important than any of these sartorial trifles, mecha. If you are or were a fan of Power Rangers, chances are it is because you are or were a fan of giant robots and/or dinosaurs. I know what did it for me. The battles in Goranger and its immediate successor J.A.K.Q. Dengekitai took place entirely on the human level. Battle Fever J introduced a giant robot, the Battle Fever Robo, and thus earned the series the Super adjective going forward.

Battle Fever J is weirdly foundational to and atypical of the Super Sentai franchise. It’s actually a collaboration between Toei and Marvel Comics. It was supposed to be something on an adaption or translation of Captain America. Thus the Rangers that populate it lack the clean color coding of every other entry in the franchise and are instead patterned on their respective nations. The giant robot element is borrowed from Toei and Marvel’s first collaboration, the 1978 Spider-Man series. In that Spider-Man is a motorcycle racer injected with the blood of an alien from Planet Spider. He pilots a spaceship called the Marveller that transforms into a robot called Leopardon.

Haim Saban, the founder of Saban Entertainment which is a producer and distributor of children’s television programs in the US, stumbled across Super Sentai while on a business trip and, recognizing its popularity and potential, eventually deciding to adapt it for a Western audience. Saban decided not to shoot a completely new series but rather to dub some of the existing footage. A totally new series would have been costly and risky. A straight dub might have seemed cheesy and alienating. He opted for something that laid sort of in-between the two obvious options. The existing footage of the rangers in their suits and robots was kept but new footage of them outside of their suits was filmed.

Power Rangers by its very nature is something of a Frankenstein series but Mighty Morphin’ Power Rangers (MMPR) is the Franken-iest Stein of them all. The Green Zyuranger, Burai, died. The lack of further Green Ranger footage led to the creation of the White Ranger. The White Ranger footage actually came from Zyuranger’s successor, Gosei Sentai Dairanger. Notably, the White Dairanger was a child. When the Zyuranger footage ran out Saban commissioned Toei to shoot more in suit footage for them to use. This is why Tommy’s fighting style as the White Ranger became more playful and mischievous. MMPR even outlived Dairanger’s successor, Ninja Sentai Kakuranger. Footage from that series was used for the Alien Rangers storyline at the end of MMPR’s existence. Eventually, MMPR would give way to Power Ranger Zeo, which used footage from Chōriki Sentai Ohranger. After that, every subsequent Sentai Series save for two exceptions has been adapted into a Power Rangers series.

The latest of these exceptions is Ressha Sentai ToQger. This one seems to have been passed over for its seemingly unrelatable train motif and overall goofy, childish tone. The earlier exception, 2012’s Tokumei Sentai Go-Busters, feels like a bigger missed opportunity. Go-Busters appears to be a real attempt to appeal, specifically to a western audience. It uses some of the previous Power Rangers exclusive terms like Megazord and the phrase “It’s Morphin time!” The costumes look more like the sorts of designs you see in modern Western Superhero adaptations like the MCU movies or CW’s Flash. Also, it has a sci-fi espionage theme that seems easily translatable. Ironically it would appear that a poor reception in Japan doomed this series to exile. I’ve heard that one of the major reasons for bypassing Go-Busters was its low toy sales compared to Zyuden Sentai Kyoryuger, the series that followed it. If toys are such a deciding factor in the success of a Super Sentai series, it might behoove us to take a gander at a few.

Like its sister franchise, Kamen Rider, there have been a considerable amount of Super Sentai figures produced under the S.H. Figuarts umbrella. Obviously, the Zyuranger figures are the most immediately recognizable to Western eyes. If you’ve been bitten by the Power Rangers nostalgia bug they’re probably your best bet. They’re accurate to the show. The Dragon Ranger, or Green Ranger, deserves special mention for being especially cool and even comes with hands that allow you to replicate his pose while playing with the Dragon Dagger.

The Figuarts line also provides a solid look at Sentai history. Some of the more interesting figures are the ones produced for the older series. Like their take on the very first red ranger, Akarenger. This figure even reproduces the small holes that dotted his visor so the actor could see out of it.

There are two figures, Red Hawk and Black Condor, for the Choujin Sentai Jetman series. Jetman is the direct predecessor of Zyuranger and is notable for having an awesome theme song and being one of the most popular Sentai series of all time. It injected a level of personal drama and naturalistic character writing that the series hadn’t seen before, opening it up to a broader demographic and saving the franchise. It was thought that Jetman might be the last Sentai series at the time and if it hadn’t done well there would have been no Zyuranger and by extension no Power Rangers.

On the robot side, the Super Robot Chogokin gives us some of the slickest takes on the Sentai mecha you’ll ever see. They lack any sort of transforming or combining gimmick but this is a necessary sacrifice for the level of detail and poseability they possess. The first of these was the bushido themed ShinkenOh from Samurai Sentai Shinkenger followed by the piratical GokaiOh of the 35th-anniversary series Kaizoku Sentai Gokaiger. The third Sentai figure released in this format was the Zyuranger mech, Daizyujin. The Super Robot Chogokin Daizyujin is a thoroughly impressive representation of the Dino Megazord, so much so that it was later imported to the U.S. with Power Rangers branding.

Bryan Cranston has said that the new Power Rangers movie will be to the original television series what Batman Begins was to Batman ‘66. The first Power Rangers was already a pretty drastic reimagining of Zyuranger and one could argue that Zyuranger is merely the fourteenth reimagining of the Super Sentai concept. This puts the new movie at the end of a fairly long adaptational legacy. It’ll be interesting to see how much of the original DNA is carried down the line. 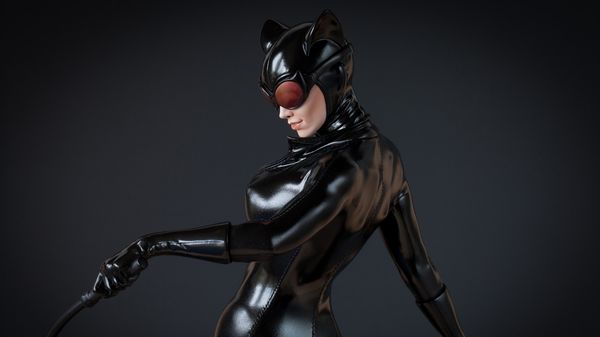 Ever since there have been square-jawed heroes, grizzled men of action and scruffy tough guys, there have been femme fatales and female anti-heroes. In French, it means “fatal woman” and

With four major reboots, two teams running concurrently and multiple timelines, the Legion of Super-Heroes has had one of the most illustrious and convoluted histories in the comic book world. But despite all this, the concept of teens from many worlds using their powers