Ever since there have been square-jawed heroes, grizzled men of action and scruffy tough guys, there have been femme fatales and female anti-heroes. In French, it means “fatal woman” and these ladies are famous for using all their charms, skills and lethality to get what they want and to get under the collar of the hero. These are not women to mess with and have been with us since the beginning of the written story. History, books, film and pop culture are full of women who are ready to love, kill or anything in between to get what they want. The anti-hero is someone who you are never sure which side of the law they are on. Sometimes it’s both. But when forced to pick a side, these ladies will always pick their own.

Perhaps the most famous pop culture femme fatale and one of the earliest “villains” to change sides, Selina Kyle aka Catwoman has been a thorn in the side of Batman for nearly all of his 75 year run at DC Comics. She has never been above using her feminine wiles to get her way, or more often than not, to simply get away. When the wiles failed her she could resort to her trusty cat-o-nine tails or a good right hook, but this sometimes hero/sometimes villain and all the time kick ass Gotham Siren has long been a force to be reckoned with and only trusted at your own risk.

Before she was a mainstay of the Avengers and every Marvel movie geek’s favorite redhead, Natasha Romanoff was a Russian spy and a trained femme fatale. One of her earliest assignments was to seduce industrialist Tony Stark to get information for her superiors and later, got adventuring archer Hawkeye to aid her in her battles with Stark’s alter ego, Iron Man. She changed sides and now uses her fists more than her charms but she is still someone who can turn heads as easily as bust them.

She may not be bad but she is most certainly drawn that way. She may look like the classic femme fatale with her sexuality right out there for all to see and she was an immoral social climber in the original novel “Who Censored Roger Rabbit?” but in the Disney film she was a sultry but devout wife to her husband, the manic Roger Rabbit. She may be the only femme fatale on this list who doesn’t live up to the name.

If the term “fatal woman” ever applied to anyone, It would be Elektra Natchios. The Greek-born Elektra became one of the deadliest women of the Marvel Universe, being trained by Daredevil mentor Stick, his mentor Stone and the ninja clan, The Hand. Killed, resurrected and controlled on several occasions, this tough lady holds her trusty sais with steely resolve for actions that she deems worthy of fighting for, no matter if they are considered good or evil by others. At times, she can be found working on the side of the angels, but usually, she has her own agenda that clashes with the more heroic types.

This chlorophyll princess could make anyone a plant lover right up until her poison kiss turns them into mulch. Dr. Pamela Isley was transformed from a brilliant but mousy woman to a voluptuous plant and animal hybrid that uses her feminine attributes and plant-based powers to help fight those who would destroy her beloved plants. She’s also known to keep Batman from interfering in her work. She is an eco-terrorist and defender of the natural world. A long-time foe of the Dark Knight, Poison Ivy has little regard for humans and would prefer a world of vibrant green over concrete and steel. Her deadly demeanor has softened somewhat through her association with another anti-hero, Harley Quinn.

If there is any character in modern comics history whose sexuality was out front for all to see, it is Emma Frost. When we first encounter her as the villainous White Queen of the Hellfire Club, she is dressed in an all-white corset, panties, garters and stockings and high heels. Even as she evolved into a leadership role in the heroic X-Men, she still wears tight and revealing white clothing. She sees this attire as “armor” that gives her a psychological advantage over many opponents. She has expert skill at using this distraction as a means to find her way into the minds of her opponents to use her omega level psionic powers.

Several women have worn the increasing brief costume of Star Sapphire over the years but none so famously as Carol Ferris, boss and love interest to hot-shot test pilot and Green Lantern, Hal Jordan. Despite having the Zamoran persona and gem removed from her several times, Carol keeps becoming possessed by the Star Sapphire and battling Jordan, often nearly killing him. In recent years, the pink light has come to represent the power of love and the Star Sapphires have become their own cosmic Corps in the emotional spectrum.

Felicia Hardy is many things: socialite, party girl, thief but what she promised herself that she would never be again is a victim. Driven by revenge after a date gone very wrong in college and the inspiration of her cat burglar father, Felicia learned acrobatics and martial arts, as well as safe-cracking and other thieving techniques to follow in her father’s footsteps. She has been with and without powers over the years and she has had a relationship with Spider-Man that is as on and off again as her relationship with the law. Regardless of what side she is own, it is always bad luck for anyone who crosses her path.

There are times in life when you feel you are in a moment that is going to really mean something to you over time. For me, it often comes in the form of a conversation and I’ve done a lot of interviews in 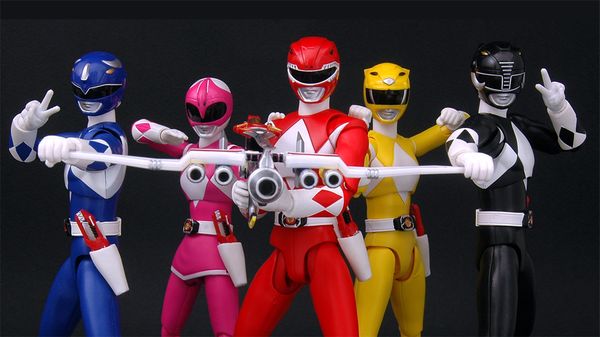 Did you know that the first Power Rangers series was actually adapted from fourteenth Super Sentai series? Kyoryu Sentai ZyuRanger, upon which Power Rangers is based, premiered in 1992. That