I will say, without reservation, that I’m a massive fan of tabletop role-playing games and the history and lore of Dungeons & Dragons. Over the years, I’ve had a unique perspective to watch the game evolve from it’s earliest indie days to it’s explosion in the 80s, eventual decline, and modern resurgence. I was first introduced to it at the age of nine, and I’ve been dabbling around this game, off and on, for almost forty years. I made my very first character just four years after the game itself was first published. In many ways, I grew up with D&D as a backbone to my imagination, and have always been thankful for its influence.

As I’m betting you are aware, Dungeons and Dragons has seen a resurgence over the last few years. If you are wondering why that is the case, I take a few stabs at that question in a previous article here at CompleteSet titled “Gary Gygax: Father Of The Dungeons & Dragons Game,” so I won’t retread that ground here. This time, I’m narrowing my writing focus quite a bit as I looking at one of the most eye catching aspects of the game… the monsters! Here specifically, monsters that are part of our culture, but didn’t exist until they were created for D&D.

Were you one of those Stranger Things fans who raced to wikipedia when Finn Wolfhard’s character Mike slammed the demogorgon down on the game table during the season’s opening episode? That powerful demon prince held clues intertwined into the plot of the series– but the strange visage of that tiny miniature captivated many. This is the nature of D&D monsters. They bring about a sense of wonder, and challenge the imagination to explore strange cultures, their history and, sometimes, their motivations. It’s one of the most entertaining aspects of D&D.

If you walk back through all the many Monster Manuals and Fiend Folios we’ve seen through the different versions of the game (we’re playing the 5th edition these days), you’ll quickly see that D&D pulls from a wide mix of sources for its creature inspiration. You’ll find beasties from mythology, science-fiction, and fantasy literature mashed together in a reverent pastiche that feels all-encompassing. Sometimes, it’s hard to tell where Tolkien ends and D&D begins. This is so true, it was even the point of a copyright dispute that helped define that line between the novels and the game.

Sure– the dragons, orcs and vampires are fun. But what always fascinated me were the monsters that were original to the game itself and have gone on to become culturally iconic. Here are six creatures that have entered our world as a direct result of the D&D’s early creators (plus the stories behind them).

One of the most recognizable creations from the would of D&D is the Beholder. Yes, it’s a floating ball of flesh with a massive mouth, a leering central eye, and a series of eye stalks protruding from the top of it’s head. It looks like an angry, armored floating eyeball, but what makes it even more fearsome is that each stalk atop its head can manifest it’s own magical ability. The image of this creature has become as recognizably a part of the game as the dragons or giants we know so well.

Rob Kuntz was one of the very earliest people to be a part of the game as he sat at the table with Gary Gygax and played in the second session of the game ever run. That said, it was his Rob’s brother Theron who actually created the Beholder. Theron and Rob would go on to work with Gary as TSR and D&D took shape, but it would be Gary in the end who evolved the creature a bit for publication. The beholder even made the cover of Greyhawk, one of the first D&D supplements.

The game Gary Gygax helped create can be seen as the root of much of modern fantasy, cinema and even the video games we play today. That makes a creature which Gary himself created all the more interesting. The Gelatinous Cube is just such a creature.

Imagine if you will, a ten-foot by ten-foot cube of transparent gelatinous ooze that appears clear as it approaches. This creature shifts to fill a hall or passage and slowly advances hoping some unwitting soul steps into it. The cube has the ability to absorb and digest organic matter all the while stinging and shocking those who come into contact with it, paralyzing its prey. Given its near transparent visage, it’s very easy to be taken by surprise while walking through your next dungeon by Gary’s little critter.

You kneel before the chest surveying the three goblins you just dispatched to claim the treasure that lay inside. As you begin exploring the lock, two arms manifest from the sides of the wooden box, battering you upside the head as a toothy maw emerges from the center of the box.

This is what makes a mimic so captivating a creature. It takes the shape of ordinary objects and lays in wait to attack those who come near. As the old joke goes, “A joke was told. The barkeep laughed, the party laughed, the table laughed… We killed the table.”

Although some might argue that the short story “Colony” by Philip K Dick in 1953 may have paved the path for this creature, it first appeared in the 1977 Monster Manual and is consider by most a D&D original.

We put these three together because they share such a similar origin story which we’ll get to in a moment. First, let’s look at each of these wonderful creatures.

The Rust Monster looks a bit like a fat lobster with a propeller at the end of its tail. It doesn’t really harm a player as much as consume their treasured items (such as weapons and armor) by rusting them as it eats them in mere seconds. This creature also carries the distinction of being one of the first original monsters ever created for the game.

Moving on, you can think of a Bulette as a kind of land shark that burrows through the earth and attacks unsuspecting victims from below. It’s a heavily scaled and highly carnivorous little creature.

Finally, the legendary Owlbear. It may surprise you to learn that this one basically looks like you mashed together an owl and a bear (the name kind of gave it away). Standing upright, it will grapple with an opponent hugging it them pecking it to death with it’s beak.

So why lump these three into one? Long before the first page of D&D was written, Gary Gygax was playing the predecessor to D&D know as Chainmail. Always on the lookout for monsters to throw at his players in this war-game, he spied a small plastic bag of toys called “dinosaurs” at a dime store. Of course, some of the plastic figures were represented by some very odd shapes in this mishmash of plastic figures created in Hong Kong. While looking at these figures and working them into his war-game, he conceived the idea for the Bulette, the Owlbear, and the Rust Monster. He never forgot the strange little figure that looked like a strange lobster that had a propellor for a tail. That little propellor, in some ways, is responsible for all that followed.

Talk about your ultimate collectible. I wonder where that little plastic figure sits today. Here’s to hoping it’s in a glass case in the home of one of Gary’s kids. 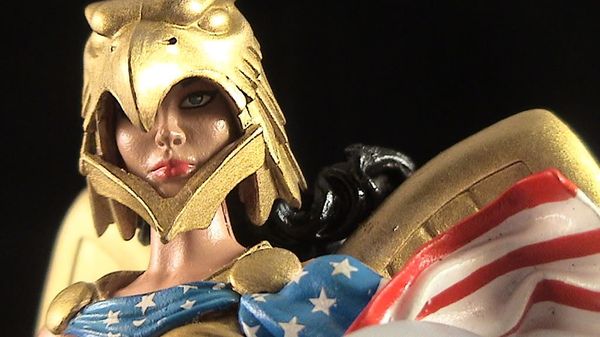 With her feature film debut on June 3rd, Wonder Woman will be taking her place amongst the pantheon of great DC characters. Although she hasn’t been featured much as 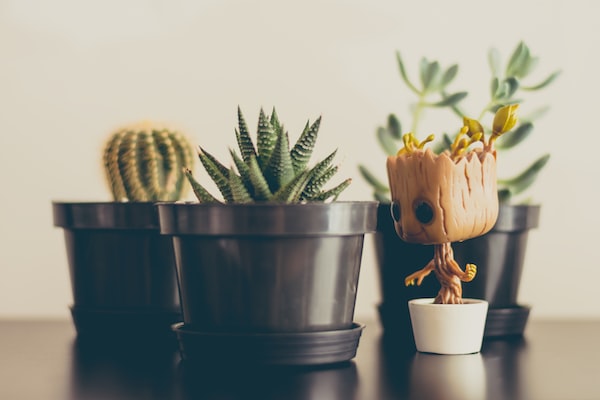 I think it is safe to say that a giant walking tree called “Groot” [https://en.wikipedia.org/wiki/Groot] stole a lot of the limelight (and everyone’s heart)