Jurassic Park is a bit of an anomaly among the pantheon of beloved blockbuster properties. It’s limited in a way that few others are. Michael Crichton crafted a world in which genetic engineering and cloning have been seemingly perfected. It’s a world of high-stakes corporate espionage. It’s a world where mathematicians can be leather clad rock stars. There’s a lot going on there but what can you do with it? In practice, it doesn’t seem to be a whole heck of a lot.

I think there’s an important difference between a franchise and a universe. A universe is defined by what’s in it but a franchise is defined by what you can do with it. The lines can be blurry. A universe often contains franchises and a franchise can evolve into a universe. We’re currently watching Star Wars go through that evolution for the second time in its forty year history.  In fact, the last two Star Wars films provide a pretty clean contrast between franchise and universe. The Force Awakens is very much a franchise film. It tells the “Star Wars story”, it hits the familiar beats, it sticks to a tone we’ve seen before, and it uses character archetypes we’re familiar with. Rogue One, on the other hand, is a story in the “Star Wars universe”. It uses concepts we’re familiar with and plays with a history we know but it tells a story that’s out of step with its predecessors. It doesn’t follow the same arcs. It doesn’t make the same choices.

Jurassic Park is stuck in franchise limbo and it’s a particularly limited franchise at that. The Terminator occupies a similar space but its setup feels a little bit more open to experimentation. All a Terminator film needs is a chase and at least one robot from the future. Infinite possibilities exist in that framework. So why doesn’t Jurassic Park feel the same way? I think the answer lies in The Lost World. A good sequel is what actually establishes a franchise’s blueprint. By including or changing things from the previous film it shows us which elements are essential. Terminator 2: Judgement Day (the greatest sequel of all time non-Gremlins category) keeps the chase and the robots but flips things around. Now the T-800 is a hero and John Conner isn’t just some unborn MacGuffin, he’s the protagonist.

The problem with Jurassic Park is that its sequel wasn’t all that good and the film that followed it was even worse. Nobody wants to follow a framework laid out by The Lost World and absolutely nobody is looking to craft another Jurassic Park III. So when Jurassic World came along it had no viable reference points beyond the first film. Jurassic World opted to expand on the original film. It does pretty much everything its predecessor did but bigger. Jurassic World really only adds one major element. It also doesn’t cut much out except for specific characters and that seems less like a choice and more like a concession to the passage of time. So now we’re four films deep into a franchise that’s never been successfully boiled down to its essential broth. We have no guidelines as to what a Jurassic Park film actually needs. Can you leave the park? I don’t know. Does it just have to be just dinosaurs getting cloned? I don’t know. Does it have to be a disaster story? Can you tell a mystery or a war story or a biopunk thriller or a workplace comedy? The closest to a real answer we’re going to get is “Maybe, I guess if you can do it right.” Jurassic World 2 sits at a dicey crossroads. If it tells any story that’s not the third retelling of Jurassic Park it runs the risk of feeling out of place and disloyal to the franchise. If it does hew too closely to the original it’ll feel stale and tired. However, if it threads the needle just right it could open things up and provide fertile ground on which the franchise can flourish.

As early as 1998, a year after The Lost World and three years before Jurassic Park III, we can see people brushing up against the limits of the franchise and exploring exactly what Jurassic Park can be. Chaos Effect is a weird, and strangely prescient, little corner of the JP world. It came on the heels of the second line of Lost World figures and was an attempt by Hasbro to keep the money train rolling past what the source material would have allowed. Seventeen years before Jurassic World’s Indominus Rex Hasbro made the decision to release figures of hybrid dinosaurs.

Chaos Effect was sadly short-lived and never got a chance to blossom into the wonderful, weird monstrosity it could have been. Supposedly there was going to be a multimedia campaign around, including a planned cartoon that never saw the light of day. Most of the toys designed for the line never saw release but a few of them made it out into the wider world and each one is a beautiful example of that amped up, capital X x-treme 90s aesthetic. The Alpha Raptor, Omega T. Rex, and Thrasher T. Rex all use molds from existing Jurassic Park toys but trade in the drab browns of their more cinematically accurate counterparts for wild, fluorescent paint jobs but the real stars of the show are the hybrids.

Ankyloranodon is a pteranodon with an ankylosaur’s club tail, simple, brutal, beautiful. Amargospinus and Paradeinonychus are both variations on a theme. They’ve got kind of a Charles Atlas thing going on. They’re gentle herbivores with interesting body shapes and ornamentation spliced with carnivores. Finally, the Parasaurolophus is as badass as we all, apparently, wished it could be. Nobody’s gonna push this crested lizard around anymore. Maybe the strangest design choice of the released hybrids is the Velocirapteryx. It should be simple enough, a velociraptor that flies like an Archaeopteryx but in execution, it looks more like a velociraptor with porcupine quills.

The crown jewel is the tragically unreleased Ultimasaurus. Marvel’s Secret Wars comic and toyline were named that because research showed that “secret” and “wars” were the two words that kids got the most excited about. Ultimasaurus feels like a dinosaur created using that same philosophy. It’s an unwieldy hodgepodge of everybody’s favorite dinosaurs, T. Rex, Triceratops, Velociraptor, and Stegosaurus. Don’t despair though, there is a way to get your hands on this one. A figure of Pete Postlethwaite’s character from The Lost World, Roland Tembo, was released for the line and it came with an adorable Ultimasaurus hatchling.

Would Chaos Effect have been the key to unlocking Jurassic Park’s full potential? Almost certainly not but it’s interesting to see such an early attempt to push beyond the confines of the franchise. What Chaos Effect really illustrates is that genetic hybrids are the first and easiest step forward for the series. Jurassic World already took that step but there’s going to be at least two more and they’re in uncharted territory. There are no cheesy 90s toy lines left to lend a guiding hand. They’re going to have to make some strange and crucial decisions. While it may seem unwise to certain mathematicians, I think the people making these films should take a page from the team that worked on Chaos Effect and spend less time thinking about what they should do and more time thinking about what they could do. 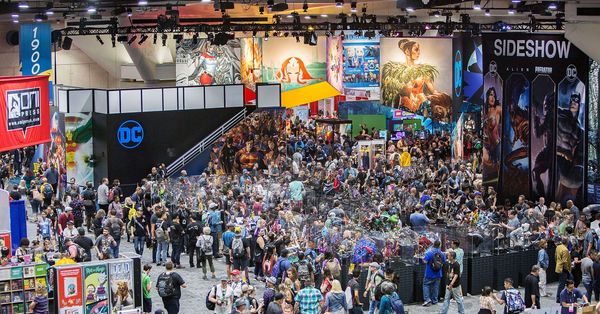 I love comic books. I can say that with confidence as, at one point, I was reading over 150 titles a month and still maintain a collection that tips the

Much like the concerns of Governor Tarkin aboard the first Death Star, an awful risk was taken in 2013 by Hasbro. For nearly 35 years the Star Wars [https://www.completeset.com/archives/star-wars] franchise thrived in the 3 ¾” scale (one which they essentially