The invention of the VHS and the oldest known board game, Senet, are separated by over five millennia of history and around six thousand miles of land and sea. The Video Home System cassette was forged by the Victor Company of Japan, or JVC, in the industrial crucible of post-war Yokohama. Senet dates back to at least the third century BC but that’s just the earliest representation we know of. We have no record of its concept or creation. It also doesn’t seem like a first-draft. There’s almost no chance that Senet was the world’s first board game. It’s entirely possible that humanity has been crafting board games for as long as it has possessed the capacity to craft. So, it was all but inevitable that this two pure expressions of humanity’s primal desire to create and innovate would collide. Surely the creations that arose from this momentous union would be inspiring titans of human achievement? Well, not so much. The VHS board game is a weird concept. It never really works all that well in execution and in all honesty it doesn’t even sound that great in concept. It seems like an idea that everybody thought could work but, as far as I can tell, nobody actually made it work. It’s like the clunky, analog sister of the FMV game and like FMV, the field is cluttered with charming failures and offbeat novelties. Let’s see if we can’t find the Night Trap of board games.

The Nightmare or, as it’s known in Europe, Atmosphear solidified the model that a lot of VHS board games would emulate. You take what might otherwise be a completely unremarkable game. You crank up the aesthetic theming. Then you cast an appropriately hammy actor as the face of the game. The VHS element consists mainly of that actor popping up on the screen at certain intervals to harangue the players and volley various penalties and challenges at them. The face of Nightmare was The Gatekeeper, a hooded figure that seems to take his major inspiration from The Vault-Keeper (The Crypt Keeper’s counterpart in the Vault of Horror comics). The people behind Nightmare, Australian designers Phillip Tanner and Brett Clements, turned their game into a franchise by releasing expansions. These expansions kept the same board but added new tapes, each with a new host. They ran through an array of horror archetypes, a voodoo zombie, a vampire, and a witch. A fourth, mummy-based expansion was planned but was never released. Instead, the series was retooled into the less evocatively titled Harbingers. The series was revived as Atmosfear in 2004 with the release of a Gatekeeper themed DVD game followed up two years later with one for Khufu the Mummy.

The Nightmare model was coopted for the Star Trek: The Next Generation Interactive VCR Board Games. Two were planned but only 1993’s A Klingon’s Challenge was released. I’ve actually played this one fairly recently and I can say with some certainty while it isn’t a very good game, it is a good time if you’ve got the right mindset and the right people playing with you. The host is a Klingon named Kavok. Kavok takes control of The Enterprise and sends it hurtling toward Klingon space in an attempt to stage a false-flag attack that will lead to a war. The game takes place in real time and requires the players to collect five chips that will unlock the bridge. Kavok will occasionally scream at the players and demand they EXPERIENCE BIJ (punishment in Klingon). The game is largely random and your progress is often undone by the penalties incurred when you EXPERIENCE BIJ. At one point the game even robs you of a considerable chunk of your remaining time. My friends and I came to the conclusion that it is almost impossible to win A Klingon Challenge. While the game is largely futile, the frantic atmosphere and the satisfying cheesiness of Robert O’Reilly’s performance as Kavok do a lot to mitigate the sense of hopelessness. The second game, Borg Q-Uest, was supposed to be released a year after the first but was canceled. Borg Q-Uest would have used John de Lancie as Q for its host and that is heartbreakingly perfect. Weirdly enough, a single frame of Borg Q-Uest has seen the light of day in the form of a picture on a Star Trek CCG card.

Whether intentional or not these games edge kind of close to a fusion of board game and tabletop role-playing game. The hosts act almost as a sort of pre-recorded gamemaster, a terrible one but still. There had been RPG-influenced board games for quite a while before the early nineties heyday of the VHS game. Of particular note is 1987’s HeroQuest. This was a collaboration between Milton Bradley and Games Workshop and was actually set in the Warhammer fantasy universe. Unlike its forebears, games like Dungeon! and Talisman, HeroQuest actually put a player in the gm role but simplified the process by using a preprinted board and pre-written scenarios with specific set-up instructions. Even in a simplified form, the gm requires a greater level of buy-in than the other players and this can sometimes scare people away from it.  TSR’s DragonStrike was a HeroQuest type game, built on a version of the Basic Dungeons and Dragons rules, and came with its own VHS. It could have provided a gentle way to ease players into the gm role by foisting the responsibilities onto a prerecorded character actor but instead, they went a different way. The VHS included in DragonStrike is a non-interactive tutorial. While it isn’t particularly useful it makes up for that by being awash in ridiculous acting, laughable costumes, and some sub-Beast Wars CGI.

The world of VCR board games is a lot wider than the few I have experienced. It was a short but strangely plentiful boom. There’s a Star Wars: The Interactive Video Board Game that takes place on the second Death Star. It follows the Nightmare mold but uses Darth Vader as its host. There’s a whole sub-genre of sports games like VCR Top Rank Boxing, EPYX Play Action VCR Football, and The VCR Hockey Game. Even the king of sports is represented with The VCR Wrestle Mania Game. One, however, stands head and shoulders above all others. One will forever baffle me with its mere existence. I speak of Gone Birding! Video Adventure in Bird Identification.

Since releasing its initial wave of pop-culture themes collectibles in 2010, Funko Pop has managed to gain the hearts and minds of collectors. Know for their unique size (3.75 inches), unique visual style, and low retail price (approximately $10), Funko Pop has always 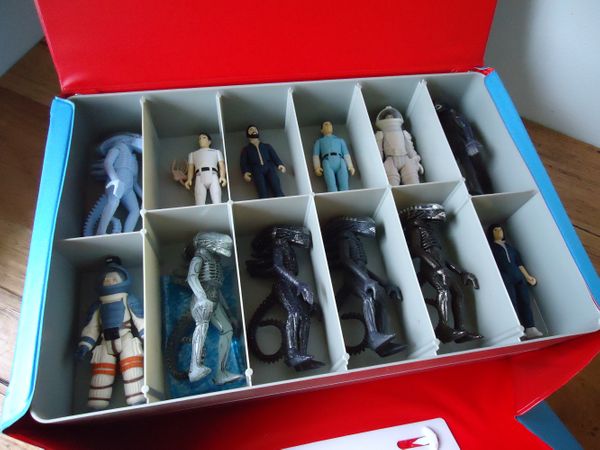 In light of the fast-approaching release of Alien: Covenant, it’s time to get real about the purpose this movie has as the newest addition to the Alien series. To