Since releasing its initial wave of pop-culture themes collectibles in 2010, Funko Pop has managed to gain the hearts and minds of collectors. Know for their unique size (3.75 inches), unique visual style, and low retail price (approximately $10), Funko Pop has always engaged fans on a deep emotional level. So it’s no surprise that Doctor Who is not only part of the Funko Pop collection, but that the company has crafted some unique figures that provide extra collector appeal.

With its first wave in 2015, Doctor Who-themed Funko Pops demonstrated wide variety, a sense of the show’s history, and flat-out fun. Coming out of the gate with four Doctor figures, Funko Pop made sure to have figures with wide variations. The Twelfth Doctor, for example, was released as a regular figure with variants which included that Doctor with a spoon, as well as a spacesuit-wearing figure exclusive to San Diego Comic-Con. The Tenth Doctor had three variants (plain/with 3-D glasses/in a spacesuit), and the Eleventh Doctor has four (plain/with Cyberman Head/Mop & Fez, and a special Spacesuit-wearing BGV-toys variant).

Not to be outdone, Funko Pop managed to dive into the rich history of Doctor Who in its initial wave of releases. The fan favorite Fourth Doctor had two variations – one plain, and one holding Jelly Babies which was a Barnes & Noble exclusive. Enemies of the Doctor – including a Dalek, Cyberman, Adipose (both regular & glow-in-the-dark), Weeping Angel, and Dalek Sec (both a plain Barnes & Noble exclusive as well as an “Evolving” model via GameStop) – were features in the raise. Finally, Funko Pop Doctor Who figure collectors could also purchase a TARDIS (although there was a UK-exclusive “materializing” TARDIS via the Doctor Who Festival).

With “Series Two” of Doctor Who Funko Pop figure releases, fans and collectors were able to dive further into the Whoniverse. Joining the Ninth Doctor were Rose Tyler, River Song, Sarah Jane, The Silence, Jack Harkness, and Game Stop’s exclusive K-9 figure. For those seeking cool variants, there was Hot Topic’s exclusive Ninth Doctor with banana Funko Pop figure, FYE’s Jack Harkness with Vortex Manipulator, and a post-regeneration Tenth Doctor via ThinkGeek. In 2017, Series Three figures included The Tenth Doctor with Hand (via the two-part Journey’s End/The Stolen Earth), the Eleventh Doctor as Mr. Clever (from Nightmare in Silver), as well as Twelfth Doctor with Guitar and Davros (from The Magician’s Apprentice/The Witch’s Familiar), the War Doctor (from The Day of the Doctor), as well as Hot Topic’s just-released Rory Centurion figure and the San Diego Comic Con exclusive Freddy Funko as Fourth Doctor.

For collectors who want to carry their Funko Pop figures with them, there’s even a small assortment of Doctor Who-themed keychains! Yes, you can open your apartment knowing that the Twelfth Doctor is watching. Even have your Adipose Funko Pop keychain at the ready for additional cuteness. Even have a TARDIS carry your keys (even though it’s much smaller on the outside than the inside). You can even have the Fourth Doctor Funko Pop keychain hold the keys to your jelly baby vault, while the Eleventh Doctor keychain unlocks your fez display case!

I think it is safe to say that a giant walking tree called “Groot” stole a lot of the limelight (and everyone’s heart) in the 2014 film, Guardians of 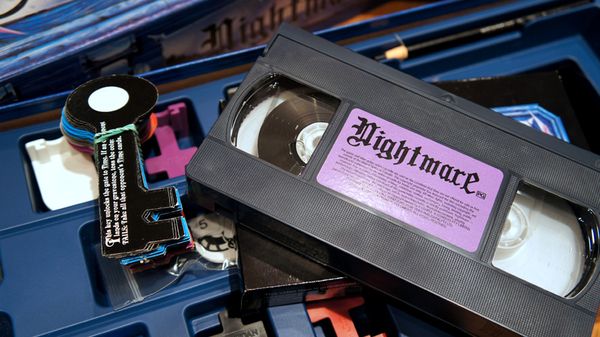 The invention of the VHS and the oldest known board game, Senet, are separated by over five millennia of history and around six thousand miles of land and sea. The