Ever once in awhile, you should make it a point in life to pen an article on a topic you are passionate about. Today, saying “Happy Birthday” to one of the principle fathers of Dungeons & Dragons, Gary Gygax, is most certainly a topic I am passionate about. Thankfully, it’s also a topic that others are celebrating as there has been a resurgence of interest in the hobby over the last two years, which has thrilled me.

Gary was the man with the name that stood out in a crowd and in grade school, high school and early college he was a kind of Jerry Garcia like figure to me and those interested in pen and paper, tabletop role-playing games (aka most of my friends). I always wanted to meet him. In 2008, thirty years after I first played D&D, I learned of his death and that I never would. Hearing of his passing that year made me want to do something I hadn’t done in close to ten years; break out a Players Handbook and roll up a character. It would take me eight more years to take that next step and give myself permission to add some selfish fun back into my life. Now, in 2016 I host two separate, narratively intertwined campaigns for friends. As I look back on Gary’s life on the day that would have been his 78th birthday, I’m filled with a treasure trove of good memories he handed me through the game he created.

You see, I started playing Dungeons and Dragons at a very early age (nine years old) and how I got started is a bit of a funny story. It was Christmas at my grandmother’s house in 1978. We were opening presents and I unwrapped a brightly colored box with a sorcerer, a dragon and a bow-wielding warrior on the cover. Inside I found a blue and white covered rulebook, a few dice, a crayon and some supplemental stuff. My grandmother looked utterly confused by the contents and started leafing through the books. Minutes later, I learned that she thought she had purchased a jigsaw puzzle and hadn’t understood what she was buying. She offered to return it, but I would have nothing of it. I was fascinated from the first moment I saw those books and that excitement has never left me. For this gamer, it all began when I unwrapped a simple Christmas present.

From 1977 to the mid-'90s, this game would be an on again/off again part of my life. In later years I became much more devoted to playing Hero Games Champions (a super-hero role playing game) with friends hosting an eight year campaign. That said, the sidelined D&D game was always there lurking in the shadows (right beside Battletech, Call of Cthulhu, Traveler and the often underrated Gamma World). These games became, over the years, more of a good excuse for friends to gather than a serious hobby. That was just fine by me as it was a chance to take an evening (or sometimes an entire weekend) and just have fun. I've never laughed so hard as I've laughed while role-playing with friends and now, understanding better the organic nature of that laughter, I probably never will outside of these games.

Personally, I owe a debt of thanks to Gary for the game he co-created, if not for the creativity it fostered in me then for the friendships it brought into my life.

Stepping beyond my personal experience within the game, I would like to take just a few moments to consider the broader resurgence we are seeing in popular culture. Over the last two years, it feels as if Dungeons & Dragons has gone from being "that game from the '80s" to something that is once again a household point of discussion around the savvier, gamer focused homes (whose numbers grow year after year).

I first noticed the trend when I penned the article "9 Surprising Things About The History Of Dungeons & Dragons" back in October of 2015. I think some of the resurgence has to be credited to the press that surrounded the release of Empire of Imagination: Gary Gygax and the Birth of Dungeons & Dragons by Michael Witwer. This was the first formal biography of Gygax's life. They did a good job beating the drums, but it also felt as if the public were already prepared to call up and discuss a mix of nostalgia tied to the game. It felt as if the excitement was already there just boiling under the surface.

What could have seeded the ground so well? I would give even more credit to the 2014 release of the 5th edition of the game which rolled out all the core products over a twelve month release schedule culminating just as 2015 got underway. As someone who has been around the rules quite a bit over the years, the 5th edition really feels like Wizards of the Coast finally hammered out all the rough edges and provided fans with a complex version of this legendary game that was both technical and cinematic. It really is a beautiful implementation of a role-playing game both in terms of honoring its own history and distilling that history down to a version I have called “near perfection”.

What has followed is a slow explosion in popular culture. Whether you are watching the Netflix '80s homage sci-fi series Stranger Things (which even Stephen King is celebrating) where D&D is a narrative cornerstone of the show or you’ve stumbled across Dan Harmon's HarmonQuest (a mix of live, on stage tabletop play and animated RPG fun) or you’re simply hearing about all the A-List Hollywood celebs sharing their passion for the game, it feels like we’re starting to see a culture moment and I love it. Warner Bros. is even preparing to cash in on the trend as they’re beginning to roll out more and more details on the newest big-screen iteration of Dungeons & Dragons. Currently the film is set to shoot in the UK next year.

In a broader sense, for me it all seems very logical. In an age where we are increasingly gaming online and building friendships through social media and non-personal interactions, it is unexpectedly refreshing to grab some nostalgia based face-to-face time. Playing the game calls friends to gather and interact in a way that can feel somewhat lost in modern culture. There's a lot more afoot here than just tossing the dice. Why simply watch Game of Thrones when you can have your own adventure and intrigue with your friends at your side building the story as you go? I say open a rulebook, find people excited about sharing the long tradition of this game and enjoy the adventure!

In “The History Of Harley Quinn: 1992-2002” we saw Harley Quinn in her animated origins, her first comic book appearance, and her live-action debut. Now we will explore her time as a 1940s war hero, a Gotham gang leader, and a high 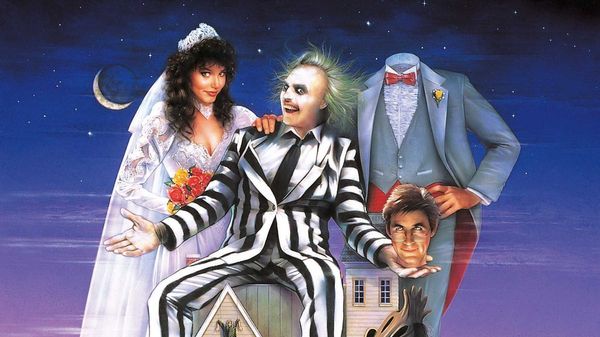 Hot to Trot is a movie from the eighties about a horse. The horse is voiced by John Candy. He gets into a wacky misadventure with Bobcat Goldthwait. The score