For the lifelong collector, there are a lot of things playing into the psychology of wanting things. Certainly nostalgia and recapturing a more innocent and exciting time of discovery factor into this drive for many individuals. Be it the first time they saw Star Wars, that moment they initially snapped two LEGO pieces together, or held onto a much loved American Girl Doll they just know can never be replaced, we get why they love the things they love (even when we don’t necessarily share that passion). For others, it may not be nostalgia, but rather a newfound love for a recent brand, franchise, or film that sends them on a race to complete their collection.

However you find yourself drawn into collecting it becomes the love of the chase, the act of organizing your collection, and the sense of accomplishment you get when you find key collectibles that keeps it feeling fresh. That said, there is one side of collecting that I don’t think gets enough attention. It is the way in which some collectors define themselves, to a degree, through the things they love. It’s a drive that leads to displaying parts of your collection as a way of self identification. (Which I find very fascinating, partially, because I do it myself.)

We’ve all seen that “cool desk” at the office that has a mix of insanely artwork driven toys or maybe that fanatical action figure fan who’s buried in a sea of articulation each time he or she reaches for the mouse. Come on, if you’ve ever met a deep Transformers collector, you know right away there is more than meets the eye at work with their collection, and they are all too happy to pull figures off the shelf and show you how they twist, shift, and transform. Don’t we all know at least one Game of Thrones or Walking Dead fan whose walls and halls are lined with memorabilia small and large? Don’t even get me started on those Rubik’s Cube fanatics because there is more afoot here than a simple collection.

In each case, the items these individuals collect says something about their passion and, if we’re being honest, that plays into the collections we choose to display in our life. If you grew up loving Doctor Who, you want the world around you to know that because it elitists conversation you enjoy, brings out the fandom in others, and allows you to put forth something that makes you different from everyone else, in a small way. You’re a Whovian and you stand ready to discuss your first Doctor, but also you made that choice to show it off because you chose to feature that aspect of what you love.

The recent unveil of a new set of Daft Punk action figures from Medicom (pictured above, currently up for preorder and shipping at the end of 2016) started me thinking about this entire topic. I love these action figures because I appreciate Daft Punk, but at the same time I would love to have these action figures on my desk because they would say something about me, about my music taste, and about a personal style (if I claim to have one). It’s interesting how collecting can be about making an impression as much as following your individual passion. Here, these very stylized figures are different from the usual “Hulk Smash” Marvel movie of the month desk accessories. People see these figures and know a little bit more about me, and I like that representation presented through my collectible choices.

I’ve learned a lot about collecting culture since joining CompleteSet. As I’ve grown my collectible knowledge base, I’ve noticed a handful of companies that play really well in the realm of personal collectible presentation and style. Not all their names may be familiar, but their creative aesthetic makes for products I encourage you to explore and discover stuff that may just reveal more about your deeper style. Here are a few companies to consider which will get you started!

Kidrobot likes to say that they “bring art to life”. Founded in 2002 by Paul Budnitz, this company specializes in producing and selling artist-created toys and often find themselves on the cutting edge of a union between art and toys. From street trends to pop art to sculpture to fashion, their lineup runs the gambit from $5 to $25,000 and their creations can be found online, at their San Francisco and Las Vegas stores, and via temporary pop-up stores appearing in cities worldwide. Credited by some as an early leader in the designer toy market in the US, Kidrobot blazed trails when it came to art toys, vinyl toys, and urban vinyl, owing credit to the production processes and formats that proved so successful for toys from the 60s and 70s in Japan. As much art incubator as production company, their stuff just creams style and individuality.

If your style is nostalgia driven, we have just the company for you to retrofit into your life. 8-bit ZOMBIE (or 8BZ) caters to all you children of the 80s who grew up on a steady diet of those video games, movies, cartoons, and toys that now elicit so much emotion from anyone who was there in the day. As they put it, “we work hard to bring you the most unique tributes to the raddest decade there ever was”. What starts with tees, tanks, hats, and shades does not end there, and decking yourself out in product based, retro-interesting, creative twists on this decade never felt so easy. Highly recommended!

What began with the commission of small runs of posters at the Alamo Drafthouse movie theaters in Austin in 1997 evolved first into the Mondo Tees T-shirt shop in 2004 and, in time, a poster driven artistic empire. Digging deep into the heart of popular film and television, the media focused posters of Mondo speak to the mood and devotion fans have for the characters and stories of the cinematic experience. They have elicited a cult like collector following among Mondo fans and by serving these up, you instantly speak to your passion. Through their screen printed posters, vinyl movie soundtracks, VHS re-issues, toys, and apparel they have been turning heads for years now. To say this company has made an impact would be an understatement, and many of their posters cover the walls of the CompleteSet office as we speak. Explore their archives or their permanent Austin gallery space for a true trip through creativity (and fandom)!

This most unordinary bakery, founded by Johnny Earle, has served fans a t-shirt empire which all began back in 2001. Anchoring a clothing brand on a food theme was unexpected, stylish, and got people talking quickly about Johnny Cupcakes. Twisting up pop culture references with cupcakes in a fun way, Johnny went from selling out of the back of his ’89 Toyota Camry to evolving a company that shows no signs of slowing its growth in short order. When you nab a Johnny Cupcakes product (not always easy due to demand), the style and creativity is immediately present. What isn’t immediately understood until after you start collecting is the almost cult like following this brand has and the community you quickly find yourself joining. Within his bakery inspired stores (often complete with refrigerators, baking racks, and the smell of frosting), the detail here speaks to the quality of product, right down to the signature pastry boxes served up with each shirt. Style and creative individuality allow you to craft a collectible message all your own.

So, what are you waiting for? Get shopping, log your collection here at CompleteSet, and give us a taste of your collectible style. Always remember, in some small way, ultimately we are all what we collect! 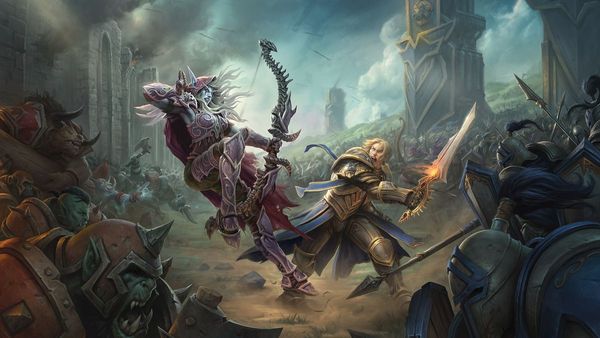 Since it’s introduction in 2004, Blizzard Entertainment's World of Warcraft has become the most-subscribed MMORPG in the world. The fantasy game takes place in the world of Azeroth, which

Articulation, also known as points of articulation, is the ability for a figure to move and the amount of areas that allow that movement. Toys based on people or animals were formerly stiff and unmoving molded things or plush fabric pieces. Some articulation began