What could you do with $7,726,094,661? If you’re Marvel Studios, or any of a number of other studios making Marvel films (Fox, Sony, etc), you enjoy the writing on the wall and push forward gambling that the fans will be there and success will continue. You see, that staggering dollar amount represents the gross theater totals for all the Marvel films to date according to BoxOfficeMojo. I’ll let that number sink in for a moment.

Okay, many of these properties have become proven cash cows and, from a studio’s perspective, until that bubble finally bursts, superhero films are a clear way to dependably bet on future profits. Despite some fan cries of “too much”, these films continue putting tails in theater seats at a time when that has become an increasingly difficult task to accomplish. Sure, these superhero films can be formulaic and adhere to certain story beats that become very predictable, but fans of the genre still love and support them, opening their wallets to go see them again and again. Until those facts change, we’re going to see more of these films and franchises. It just makes financial logic.

Studios are increasingly willing to gamble and invest big on this bet. The reported budget for Avengers: Infinity War (Parts 1 and 2), the follow-up Avengers films arriving in 2018 and 2019 is truly staggering. If word in the rumor mill from BleedingCool (a website known for successfully leaking early info on these sort of projects) is to be believed, these two films will have a budget of $500 million each… Yes, that’s one billion dollars in total for two films.

If true, that would not just be record setting, but it would be staggering on a somewhat global scale. What do I mean? To put this number in perspective, if we look at countries by GDP (using the World Bank’s numbers) either one of these two movies would outrun all but 27 countries in the world. Infinity War 1 or 2 alone (take your pick) would rate just below Norway and well above Austria and Iran for GDP. Can you imagine if the Marvel films decided to field an army? Given how many countries they could outspend, they would potentially rule at more than just the box office. Hulk most certainly smash!

Remember the good old days when the earth shook because Avatar’s budget exceeded $300 million? Little did we know what Iron Man’s glove and Thor’s hammer would one day bring to bear on the market. All I know is, no matter what the final budget total actually becomes, somewhere, Robert Downey Jr. is smiling.

Marvel Studios, one significant player in this game, is enjoying consistent success. As an outsider looking in, they are incredibly well organized in their approach to these films. They gather them together into planned “phases” that they deploy, like a well-planned invasion. With Ant-Man we just passed the close of phase two of their larger film plan. That second phase of films included the movies Iron Man 3, Thor: The Dark World, Captain America: The Winter Soldier, Guardians of the Galaxy, Avengers: Age of Ultron, and Ant-Man. If you’re curious what the future may hold, you can catch all the details on phase three here. To say mountains of collectibles will follow each of these films would be an understatement.

Ever masters at making sure you see and enjoy each phase, I see that Marvel Studios has conveniently packaged up all of phase two into their Marvel Cinematic Universe: Phase Two Collection. Arriving December 8th, 2015 exclusively on Amazon (and conveniently just in time for the holidays) they have a collectors set that includes Blu-ray 3D, Blu-ray, and digital copies of each of the films I listed above. They come with specifically designed disc holders, tons of added features, and set exclusive Marvel memorabilia. Taking a look, I have to say I was honestly kind of impressed as the set presents 13 discs, a life size orb containing the Infinity Stones, a gold-foiled page from the book of Dark Elves, a drawing from the Morag vault, Avengers and S.T.R.I.K.E. uniform patches, a replica of the Tony Stark Tattoo from Marvel’s Iron Man 3, and more. It was enough to make me say, “okay, now you’re just showing off”. We’ve rolled all the details into the CompleteSet listing as it is a pretty solid way to catch up on the films if you missed any. That is if you can shoulder the pre-order price of $219.99, down from $249.99 standard price.

All snark aside, I can say that I am a sincere fan of the Marvel films. Where DC is simply killing it on the small screen, Marvel seems comfortably at home playing in the film industry (with Agents of S.H.I.E.L.D. being the lone television exception to the pattern). If I know nothing else, I know that it’s a really great time to be a person who grew up loving comic characters and comic franchises. Personally, I’m not tired yet and will be voting with my pocketbook (whether I want to or not) for this trend to continue. Something tells me I won’t be alone anytime soon. 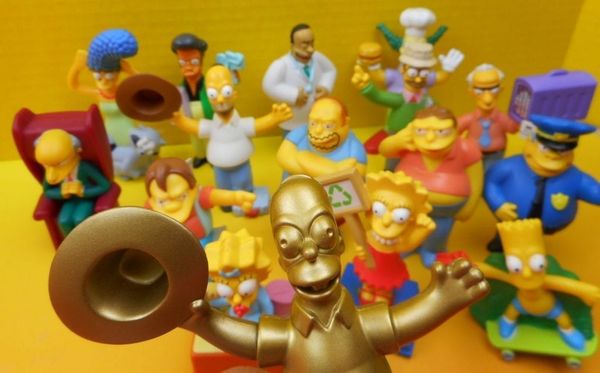 When The Simpsons premiered on December 17, 1989 it was the highest rated show Fox had ever aired. Within two seasons the show was already a cultural phenomenon throughout the

If you've ventured into any sort of retail store in the last month or so you've no doubt seen the first wave of what will soon be full on Star Wars mania. As we edge ever closer to the release of The Force Awakens