The long awaited premiere of Game of Thrones Season 6 is arriving on April 24th, 2016, and I couldn’t be more excited. With over 8 million viewers for HBO’s fantasy drama, it’s safe to say I’m not the only one. The television adaptation of George R.R. Martin’s book series, A Song of Ice and Fire, has been wildly popular since its 2011 release, with plenty of products to go along with it. Below are 6 Game of Thrones collectibles to get you ready for the new season. SPOILERS AHEAD.

1. Iron Coin of the Faceless Man

If you’re Arya Stark, you can use this coin to buy a ride from Westeros to Braavos with your own cabin on the ship. If you’re you, you can show it off to your friends. This beautiful replica is hand-crafted by Shire Post Mint and is stamped with the ominous words Valar Morghulis, Valar Dohaeris: All men must die, all men must serve.

When ThinkGeek created this wine goblet, they must have known we would need to drink our sorrows away while watching Game of Thrones. At least now we can do it in style. Season 5 left us with someone lost, someone blinded, and so many deaths. (But let’s be honest, we only care about that one death.) As Cersei Lannister would say, more wine!

3. A Feast of Ice & Fire: The Official Game of Thrones Cookbook

You’re going to need some food with all that wine, so why not make it authentic? Amateur chefs and fans of the show Chelsea Monroe-Cassel and Sariann Lehrer bring you recipes from various regions in Westeros and Across the Narrow Sea. Cook something up for your viewing party that would leave George R.R. Martin proud to take three pages to describe. I can’t wait to try the Honey-Spiced Locusts!

FunKo has given us some awesome Game of Thrones Pop! Figures, but if you’re looking for more realistic figures to recreate scenes with, check out their Legacy Collection. These highly articulated Game of Thrones action figures stand approximately 6 inches tall and are fun for collectors young and old.

We learned in Season 5 that Valyrian Steel can kill a White Walker. Since the night is dark and full of terrors and all that, you might want to grab one. Jalic Blades presents this life-size replica of Jon Snow’s sword Longclaw in their Valyrian Steel collection. The limited edition piece comes complete with a hanging plaque silkscreened with the Night’s Watch Oath, and a certificate of authenticity.

Whether you’re a fan of the books, or just a fan of the man who started it all, you should get your hands on this talking George R.R. Martin plush from Factory Entertainment. Recorded by George himself, the toy recites 10 phrases, none of which are the release date for The Winds of Winter.

If you have $30,000 lying around, you can watch Game of Thrones like a king. Just not King Joffrey. Never be Joffrey.

Are you both a toy collector and a fan of history? Let us walk you back to 221-207 B.C. and the life of Qin Shi Huang. As founder of the Qin dynasty, he was the first emperor of a unified China and also 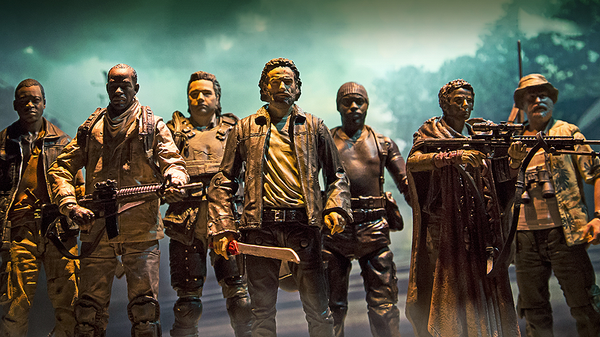 If you think of McFarlane Toys you most likely conjure up an image of an incredibly detailed action figure or playset from the company’s long-running production history. Delving