Star Wars Hot Wheels are one of those things that I was honestly surprised didn’t exist long before the date of their actual creation. It’s not that Star Wars and diecast cars like Hot Wheels are a natural fit but It does feel like these two licenses should have intersected at some earlier point in their near forty years of overlapping existence. I had just assumed that at some meeting in those early days some executive would have made the observation that kids and collectors love both Star Wars and tiny toy cars and mashed the two together long before the 2014 debut. How is this not the renewal of some long discarded license like how Marvel Comics is once again publishing Star Wars comics after a thirty-year hiatus?

The cars themselves might not seem to have any clear antecedents in the long history of Star Wars toys but the other half of the line, the diecast starships have deeper roots. The clearest predecessor to this line are the Star Wars Micro Machines. These toys came on the heels of a renewed interest in the Star Wars franchise brought on by a combination of the popular Thrawn Trilogy of novels, the Dark Horse comics, and the news of the prequels. In fact, their release in 1994 puts them a year behind the announcement of the prequels and a year before Kenner/Hasbro relaunched their classic 3.75 inch figure line. The Micro Machine line ran for six years and delivered, an obviously smaller, version of what the Hot Wheels line would eventually provide. Most of the iconic (and less than iconic) vehicles and starships of the series were reproduced with a fair bit of accuracy for their size. However, the Micro Machine line paid little attention to scale. This laissez-faire attitude toward the dimensions of the vehicles no doubt produced at least a bit of consternation among some particularly dedicated and, at times, persnickety fans of the franchise.

Hasbro produced the Star Wars Titanium Series from 2005 to 2009. It was a line of diecast vehicles in a similar scale than the later Hot Wheels toys. These models appear to be more collector and display focused than either the earlier Micro Machines or later Hot Wheels lines. They’re highly detailed and all come with a display stand. The Titanium Series was revived and folded into the Black Series in 2014. The Micro Machines line was also revived to coincide with the release of the new movies. Both lines now exist alongside the Hot Wheels toys.

Star Wars and Hot Wheels first came together in the 2014. Mattel made the announcement in February of that year at The American International Toy Fair. Details were scant until June. The 150th issue of Star Wars Insider contained an interview with Jean Gomez, the vice president of Hot Wheels. There we learned some of the first concrete details on these toys. In the interview Gomez revealed that the first of the Star Wars Hot Wheels cars would be made available for purchase at San Diego Comic Con, a little over a month after the issue’s June 10th publication date. This first product would be a Darth Vader “Character Car”.

Hot Wheels Character Cars are vehicles that are designed to invoke the impression of the figure they are based on. They are a nice step up for the equivalent, I remember from my childhood, more traditional cars that only went so far as to share a small picture of, let’s say, Wolverine on the hood with his name plastered across the side. This Darth Vader car is a beautiful piece of design. It’s sleek, imposing, and is very identifiably tribute to the character. It reminds me of the Batmobile Anton Furst designed for the Tim Burton directed Batman film. The Comic Con exclusive version of the car came packaged in a lightsaber inspired display tube with red accent lights. Gomez also revealed that they would be releasing a full line of Character Cars for the franchise as well as a line of diecast starships. At Comic Con that year Hot Wheels exhibited a life-sized version of the Darth Vader car as well as previews of the other Character Car toys.

The Character Cars concept has proven to be fertile ground for Hot Wheels. They’ve covered over thirty of the franchise’s characters to date. They also have a number of characters left to go alongside a wealth of possible variations based on characters already produced. The most recent release in this line at the time of this article is the Heroes of the Resistance 5-Pack which included an exclusive Maz Kanata car. While details haven’t yet been released, the proliferance of this line leads one to assume that as Rogue One hits theaters in December we will see some of those characters rolling around store shelves in automobile form.

As I’ve touched on before, the other half of Hot Wheels Star Wars offerings are a line of diecast vehicles. These are faithful reproductions of many of the iconic starships from the series. They are rendered with a surprising amount of detail for something that is clearly intended to be swooped around and crashed by excited children. Each figure comes with a clear plastic accessory that is fitted into the ship and then designed to slip around your finger enabling you to enact any space battles you have the digits to support. These ships took me a bit by surprise. My major image of Hot Wheels for the longest time consisted entirely of lengths of flimsy orange plastic track that my cousin and I would swordfight with more often than race cars on. This line appears to be in its infancy. It’s produced a few of the ships from the original trilogy, one ship from the Rebels animated series, and one ship from the prequel trilogy. There are still a great number of ships at its disposal and with new films set to be released seemingly every year until the end of time itself (and perhaps beyond) there is sure to be a lot for Hot Wheels to work and play with. 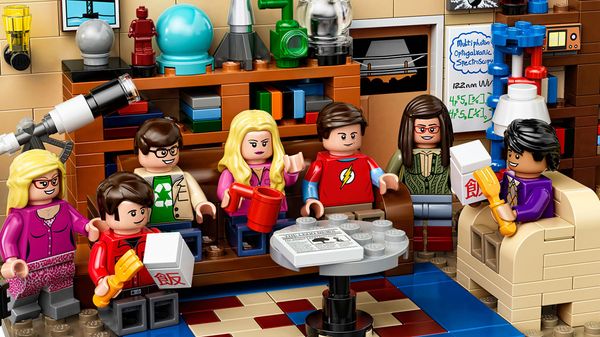 Math, science, history, unraveling the mystery, it all started with a Big Bang! On September 24, 2007, that bang was actually the premiere of The Big Bang Theory on CBS.