If you’re a Harry Potter fan, chances are you’ve wondered (and probably taken an internet quiz or two) about what Hogwarts house the wise old Sorting Hat would have put you in. Most people shoot for Gryffindor, or maybe Ravenclaw. But while Harry was thinking, “Not Slytherin, not Slytherin!” most of us muggles are thinking, “Not Hufflepuff!”

Well, as a proud, card-carrying Hufflepuff I disagree with that sentiment! Despite Hagrid’s assertion that we’re “a lot o’ duffers”, we’re actually (by definition) hardworking, patient, dedicated, and just. We’re loyal and good friends. We’re Tri-wizard Tournament competitors. We’ve produced the fewest dark wizards of any house and were second only to Gryffindor in the Battle of Hogwarts. Notable Hufflepuffs include the likes of Newt Scamander, Nymphadora (née Tonks) Lupin, Professor Pomona Sprout, and Cedric Diggory. And if that’s not enough, we’re represented by a badger, one of nature’s toughest creatures!

So, if you’re a Hufflepuff show it proudly with some (or all) of these awesome collectibles!

Love a good graphic t-shirt? This one is soft and features a delightfully simple house crest design. Show off that badger with dignity and pride!

Every home needs some art, so why not show off some Hufflepuff style while you’re at it? This print from MinaLima was designed for the Harry Potter movies. (As was all the artwork in the films.) It’s a perfect gift for the graphic design/Harry Potter nerd in your life, or a great first step to converting your living room into your very own Hufflepuff Common Room!

No list of Harry Potter collectibles would be complete without mentioning The Noble Collection. They make some really fantastic prop replicas, and the Hufflepuff Cup is no exception. Modeled after the Hogwarts heirloom and would-be horcrux of the movie series, this is a detailed and unique item to add to your collection. (And don’t worry, it doesn’t come with a fragment of You-Know-Who’s soul in it, I promise!)

Another collectible that The Noble Collection absolutely excels at are the Harry Potter wand replicas. Tonks is my favorite Hufflepuff and for me, her wand is a must have! Display it on your wall or shelf, or run around the house casting spells on your family and pets. Either way is totally acceptable in my book!

Hufflepuffs are known for their can-do attitudes and willingness to work hard. That said, we still enjoy cuddling up in a warm, comfy robe at the end of the day just like anyone else, and ThinkGeek has us covered!

Speaking of comfy things from ThinkGeek, may I introduce you to my  favorite piece of clothing? They’re soft, they’re warm, and I practically live in them. I give you the Hufflepuff lounge pants! Wear them to bed, wear them around the house, heck, wear them to work. I won’t judge! But definitely wear them.

Tired of people looking down on the noble House of Hufflepuff? Show off how awesome we are with this sorting t-shirt that features our greatest characteristics! No one can argue with the Hat.

I don’t know about you, but I’m a lover of scarves! That’s why I especially like this one. It’s lightweight enough to wear even in warmer months, and adds a subtle hint of Hogwarts magic to any outfit. If you’re a winter-only kind of scarf wearer, I can also recommend this warmer wool specimen for your cold weather excursions!

Lastly, we can’t finish this list without a snazzy Hogwarts robe! This deluxe version of a school uniform robe will have you feeling like you’re an actual witch or wizard. It has an embroidered house crest, yellow lining, and is inspired by the costumes worn in the movie series. Perfect for cosplaying at conventions, wearing every Halloween, or even everyday. It’s a must have for the Hufflepuff at heart.

In closing, I’ll leave you with a quote from J.K. Rowling herself, from the book Harry Potter: Beyond The Page, explaining why Hufflepuff just might be the best house.

“This may surprise people, but it is the truth…In many, many ways, Hufflepuff is my favourite House. Here’s my reasoning, bear with me. (Again, I don’t want to spoil things too much for people who haven’t read the whole series, so I’m going to say what I’m about to say quite carefully). There comes a point in the final book where each House has the choice whether or not to rise to a certain challenge, and that’s everyone in the House. The Slytherins, for reasons that are understandable, decide they’d rather not play. The Ravenclaws, some decide they will, some decide they won’t. The Hufflepuffs, virtually to a person, stay, as do the Gryffindors. Now, the Gryffindors comprise a lot of foolhardy and show-offy people, that’s just the way it is, I’m a Gryffindor, I’m allowed to say it. You know, there’s bravery, and there’s also showboating, and sometimes the two go together. The Hufflepuffs stayed for a different reason; they weren’t trying to show off, they weren’t being reckless, that’s the essence of Hufflepuff House. Now my oldest child (my daughter, Jessica) said something very profound to me, not very many days ago, actually, she said to me –and she, by the way, was not sorted into Hufflepuff House– but, she said to me, ‘I think we should all want to be Hufflepuffs.’ I can only say to you, that I would not be at all disappointed to be sorted into Hufflepuff House.”

There you have it friends, wizards, and muggles! Be ashamed of your badger status no more and show off your house proudly! (But not too proudly. Don’t be a dirty Slytherin.) 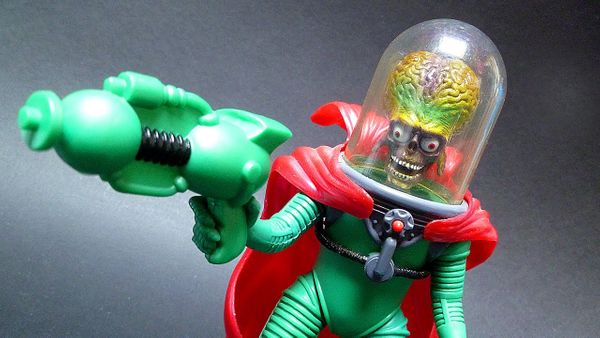 Thirty-four years before the guest star-packed Tim Burton film made it to the big screen, Wallace Wood and Norman Saunders created a trading card series called Mars Attacks that still

Anyone who has talked to me for more than a few minutes about comics knows that I am a John Constantine fan. I would go so far as to say that the character is easily my favorite. I’m not alone in that appreciation