There's an interesting bit of symmetry going on in the history of Four Horsemen Studios. In 1994, Spawn creator Todd McFarlane left Marvel Comics to help found Image Comics. Two years later he started another endeavor, McFarlane Toys. McFarlane started the company after a disagreement with Mattel over a toy line based on his comic book characters. McFarlane Toys became widely known and praised for its highly detailed figures and work tied to a number of licenses over the years. The four founding "Horsemen" – Eric Treadaway, Jim Preziosi, H. Eric ‘Cornboy’ Mayse, and Chris Dahlberg – originally converged under the employ of McFarlane Toys.

Of the founded members, three remain. Chris Dahlberg left the company in 2012. Eric Treadaway is a sculptor and designer. He works on both the two dimensional and three dimensional stages of the figure design process. He also occasionally works on the paint masters. Cornboy works as a designer and fabricator. He has described fabricating as “the art of taking a pre-existing material and shaping it into something else” feeling it is kind of like sculpting with a material other than clay. He works mainly on the mechanical aspect of the figures as well as weapons and accessories. Preziosi handles the mold making as well as some fabrication. His work by contrast requires that he take "extremely fragile models and create molds and hard castings so we can use them for practical purposes."

One can easily see the DNA of McFarlane Toys coursing through the veins of Four Horsemen Studios' creations. McFarlane Toys paved the way with their detailed designs but Four Horsemen present an almost ideological break. McFarlane produces a lot of statues (and near statues) alongside their action figure and diorama lines. Four Horsemen is an endeavor to take that level of detail and apply it to highly (often incredibly) articulated action figures. Along the way they have developed their own style and following.

Their early work on the 2002 Masters of the Universe revival was angular, elongated and stylized. Now though their work is more grounded and, well, realistic is probably the wrong word for anthropomorphic flamingos in armor. If I had to describe their style, I would say that Four Horsemen Studios make action figures that actually look like the illustrations on action figure packaging. In that regard, they have closed the gap between concept and execution in a way that is thoroughly innovative and impressive. You can see this in their revivals of classic figure lines, like Power Lords and Outer Space Men. They look exactly how one might remember their beloved toys looking before they are confronted with the harsh, shoddily painted reality that lays at the bottom of a box in your mom’s garage. The Masters of the Universe Classics figures might be the ultimate illustration of this phenomena. In fact, they might be the ultimate nostalgia figures. The studio has talked about the extensive preparations that went into sculpting those figures in great detail. With this effort, they looked not just at the original figures but at all the ancillary materials that accompanied them, like promo art and minicomics. This attention to the imagery and mythology of the series pays off in the final design of each figure.

Four Horsemen Studios would apply this philosophy to other lines as well. The DC Universe Classics line, which launched the same year as its Masters of the Universe counterpart, took the same broad, almost archival approach to its figures. It adapted a wide variety of DC Comics characters and even revived designs and characters that had previously been exclusive to the classic Kenner Super Powers line. From 2010 to 2013 they would utilize the modular Glyos joints invented by Onell Designs to revive two other classics toy lines. The first was the Outer Space Men originally produced by Colorforms and designed by inventor and Mickey Mouse enthusiast Mel Birnkrant. The second was the 1983 Power Lords figures produced by Revell. The Four Horsemen figures saw the intricate designs of legendary illustrator and concept artist Wayne Barlowe fully and beautifully realized in the final product.

The Four Horsemen have become incredibly prolific. Their work with Mattel has produced an incredible amount of figures. Their Masters of the Universe Classics line has run longer than either of its predecessors. That eight years and counting lifespan already trumps the original toyline by two years. In the course of those eight years it has produced over 150 toys, all of which have been sculpted by Four Horsemen Studios. Their DC Universe Classics line ran for a total of six years before it ceased production in 2014.

Their first original, in-house toy line was 2006’s Seventh Kingdom. This line consisted largely of a cross between realistic anthropomorphic animals and a high fantasy aesthetic. This would become something of a hallmark of their style. The Seventh Kingdom’s figures focused on mammals. The Mynotheceans were bovine. The Antitherians expanded the scope to African megafauna like rhinos and elephants and the Queen’s Council rounded out the line with big cats. Their next line, Gothitropolis would apply the same sensibility to birds. Versions of these figures would be incorporated into the studio’s next major project.

In February 2015, the Four Horsemen launched a Kickstarter crowdfunding campaign for a new line of 6" fantasy figures called Mythic Legions. These figures draw on a number of classic fantasy inspirations. They call to mind The Lord of the Rings, Dungeons & Dragons, and even the works of Ray Harryhausen. These figures display all the hallmarks of the Four Horsemen style. Their sculpts are beautifully detailed and look as if they’ve stepped right out of a Keith Parkinson or Larry Elmore painting.

The Marvel Legends series of action figures have served up outstanding figures for years beginning life as an offshoot of the Toy Biz Corporation’s Spider-Man Classics line in 2002. In 2007, Hasbro took over the licensing of the series and in 2013, 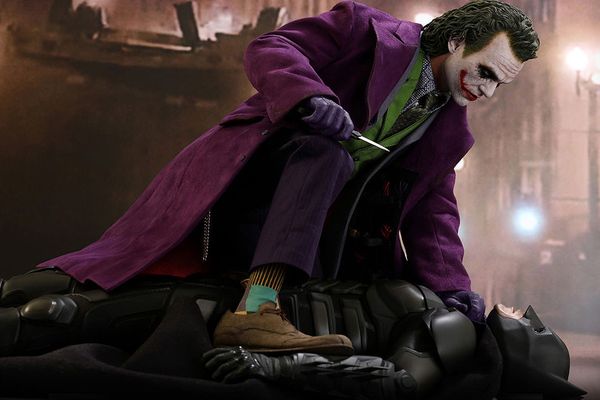 Felon. Wrongdoer. Black Hat. Malefactor. Antagonist. All words that mean the same thing… villain. These are the people that move the story along. They make the story interesting and give