Can you believe it’s already been two weeks since Round 1 debuted? If you missed all the details on what we’re doing in this series of columns, we have a solid little introductory article to get you started. With that out of the way, let’s return to Tony Isabella’s 1,000 Comic Books You Must Read for four more issues!

This was a major comic book for me back when I was just starting to become a serious collector. I was a huge Frank Miller fan and his Daredevil run coupled with the Dark Knight, the Wolverine miniseries, and Ronin were influential in my early opinions on comics. It showed me just how far stories could be taken within the medium, both in terms of art and storytelling. Here, in issue #181 from Marvel, the two combined in a way I had not seen before.

In more recent years, I’ve fallen out of touch with Miller’s work as I have trouble setting aside his more political tirades and growing “grumpy old man” syndrome. Looking back though, his work on Daredevil during this entire run was as close to comic mastery as I could find. This issue, containing the now legendary death of Elektra, was heartwrenching and yet masterful in its presentation from Bullseye’s point of view. As far as seminal stories go, this one certainly changed the lead character for all time. Daredevil has been looking back on this moment ever since. Narratively and visually, it remains a home run and contains some of the more iconic imagery from this early 80s era of comics.  A fine addition to Mr. Isabella’s 1000 to be certain, and easily one of my “10 best reads” were I to make such a list.

Jack Kirby is a name held in reverence in the world of comics. Here, in The Demon #1, we see the classic Kirby at some of his splash page best as the story opens. Tony Isabella credits the mix of horror with Kirby action as driving his respect for this issue and I cannot disagree. In the story we are introduced more to Jason Blood than the Demon, but that’s okay as they build steadily to the character’s eventual emergence at the end of the issue. For me, it was great to resample this early look at a character I loved reading about during the 58 issue Alan Grant mid-90s series. I liked that version best, but seeing the recitation of “Change! Change, O form of man! Release the might from fleshy mire! Boil the blood in heart of fire! Gone! Gone! – the form of man – Rise, the Demon Etrigan!!” in it’s classic, first form proved to be a wonderful little sequential cold chill moment. I love when comics elicit that kind of nostalgia in me as a reader.

Steeped in Arthurian storytelling, this story pulls in Morgaine Le Fey and Merlin before it’s done. What begins as a plot in Camelot jumps us forward to a battle in the modern day world. A classic tale that presents a character that has been sometimes at the heart yet often on the fringe of DC storytelling for more than 40 years. For Etrigan, it all began here.

I was really looking forward to this particular read as I remember being a pretty dedicated little Micronauts fan back in the mid-70s as I collected the Mego toy line. That said, as much as I loved the toys, when the comics debuted in ‘76 the distinctive flavor of the characters really came alive.

Sadly though, the re-read of this issue didn’t live up to my memory as it felt rushed and tossed a lot of information at the reader in a very short order. It was more about set-up than story. I admit that for those unfamiliar with the toys it may have been needed, but the pace felt disjointed and the introductions of the characters just didn’t meld for me. There was instant trust between the core cast where I felt there should be questions raised. Especially given Commander Rann’s former association with Baron Karza it just felt out of character, even given the fact that we were just introduced to them.

In the context of the broader series, I understand the relevance and agree with the inclusion in the 1000 but I’m not sure this is the issue I would ultimately recommend unless you planned to seriously commit to the overall story (which you should consider given how beloved this property was during those years). In time, relationships between the characters would become fully realized and standouts, such as Bug and Acroyear, and would light up comic writers’ imaginations for years to follow.

I am constantly surprised how rich and entertaining some of these seriously classic stories can be. Detective Comics #327 stands out due to the solo story of Elongated Man, but here the lead story of Batman and Robin feels fun, playful, and had a mysterious element that held my attention. The fact that this was a turning point in the visual design of the caped crusader, introducing a new, modern look only adds to the fun.

The Elongated Man predates Mr. Fantastic by a year in terms of debuts, but this character has nothing on Plastic Man who first debuted in 1941. That said, I sincerely enjoyed seeing how elements of Elongated Man’s personality were there from the very early days and I hold him in a bit higher esteem now that I know he broke the mold as a super-sleuth so early in his life as a comic character.

The art and stories are very much a part of their time and elements feel dated, but more in a retro-cool kind of way than anything that detracted from the story. This was a very fun read and a surprisingly accurate issue to include both from a perspective of impact and obscurity in terms of the broader Detective Comics run.

Craving more? Next time we’ll be discussing Showcase #34, Welcome to Tranquility #1, All-Star Comics #8, and Marvel Two-In-One #86. Read ahead if you like, and join us back here in just two weeks for the next installment!

The movie Star Wars and I have a very intertwined relationship. As has been the case for so many fans over the years, it changed everything for me. That said, 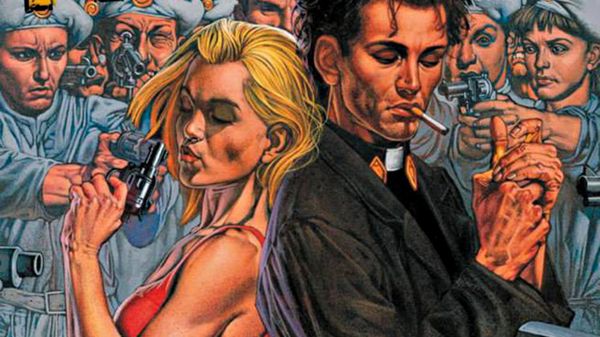 Over the course of five years (1995 to 2000) we were introduced to a group of outsiders in a story that’s earned a lot of respect among comic readers.